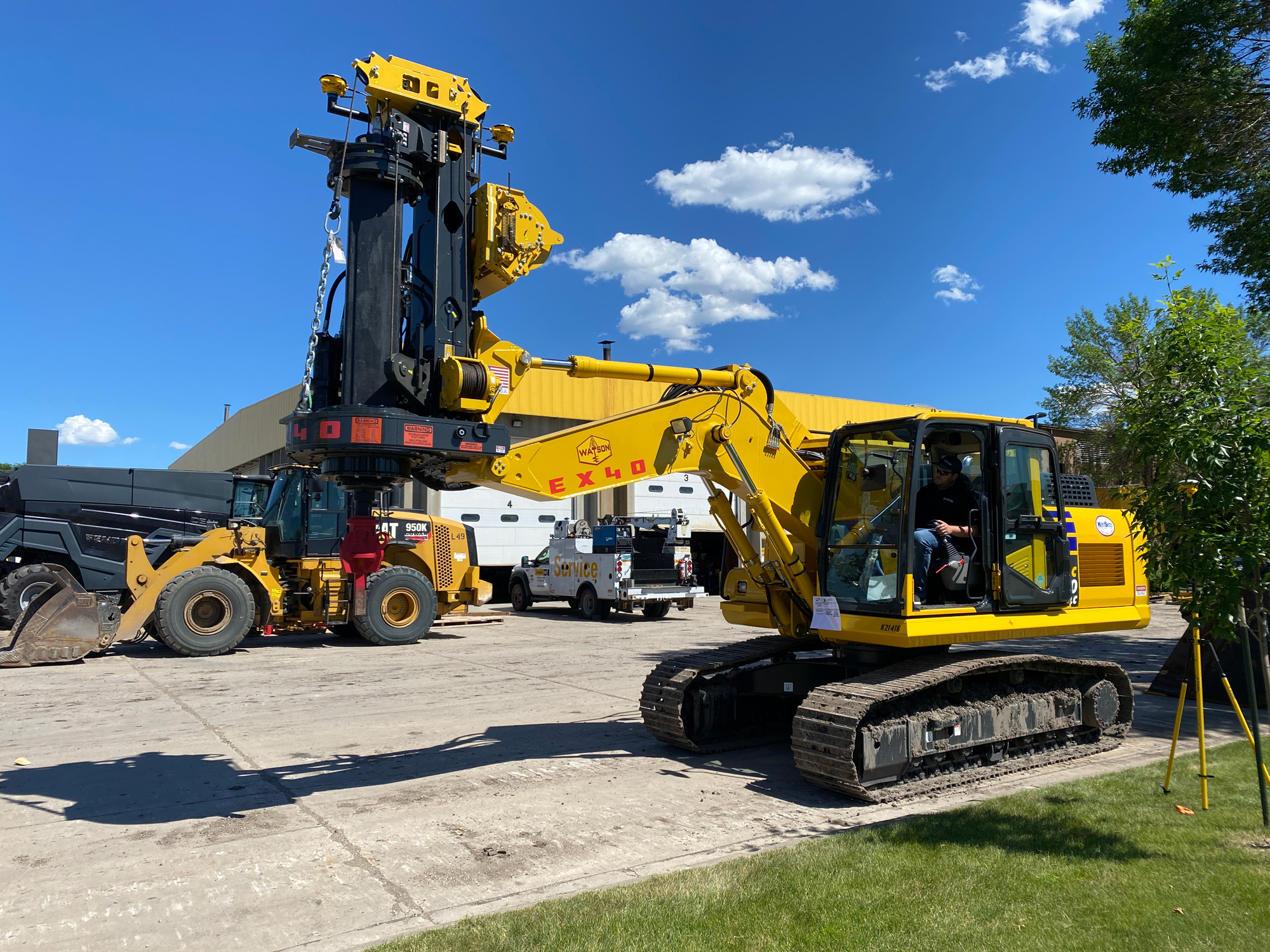 Customer Profile: Formed in 1940, Minnkota Power Cooperative, headquartered in Grand Forks, North Dakota, is a not-for-profit electrical generation and transmission cooperative that provides wholesale electric power to 11 member-owner distribution cooperatives located in eastern North Dakota and northwestern Minnesota. These members serve nearly 137,000 consumer accounts in a 34,500 square-mile area that stretches from the Canadian border to near the border with South Dakota, and east to International Falls Minnesota. There are roughly 200 distribution substations and 50 transmission substations across the region.

Business Challenge: An agile excavator and digger attachment with reach to operate in tight spaces and drill pilings with GNSS accuracy to construct new substations and transmission lines.

From innovative carbon capture and storage engineering to an ever growing renewable energy portfolio, Minnkota Power Cooperative is always looking ahead to what’s available now and in the near future.

Since 1940, the innovative power wholesaler has provided electric generation and transmission to eastern North Dakota and northwestern Minnesota. Over the years, the not-for-profit organization has expanded its network, which includes roughly 200 distribution substations and about 50 transmission substations across a 34,500 square-mile area.

The co-op is in the midst of a multi-year effort to rebuild and upgrade many of its decades-old distribution substations and transmission lines to improve infrastructure reliability, meet long-term energy needs and enable smart grid technology. It's a quest that has required outside-the-box thinking from the entire organization, including the boots on the ground who are charged with completing the necessary upgrades.

The utility’s substation improvements range from upgraded computer systems to reconstructed foundations for new equipment. Jay Bushy, a substation engineer for Minnkota Power Cooperative, is in charge of preparing  plans and specifications for new or upgraded infrastructure, as well as cost estimating, surveying and construction observation for the substations in his region. He and his team regularly look for ways to improve workflows.

“In many cases, we need to rebuild the foundations, which requires drilling deep holes in tight spaces below de-energized transmission lines,” he said.

In the past, the crews have used skid steers equipped with a drill attachment, which required a considerable amount of maneuvering to complete just one hole. “The skid steer is not the best piece of equipment for this task because it has limitations in its drilling depth,” said Bushy. “Ideally, we wanted a crawler type of drilling unit able to dig deeper with GPS.”

Such a machine would allow crews to dig large holes (approximately 36-inch diameter, 10-20-foot deep) within an existing substation site that has low head room.

The machine and attachment selection was straightforward. Minnkota selected the Watson EX40, a drilling attachment with 50,000 ft-lbs of torque attached to a Komatsu PC170 with a transport width of 8’6”, weighing just over 58,000 pounds. The drill has the ability to crowd an auger into the earth with 20,000lbs of force and a kelly winch that has an 18,000lb capacity. There is also a 5,000lb service winch used to handle tooling for the rig. The drill has a wide range of speeds that are infinitely adjustable between 0 and 60 rpm with a spinoff speed of 100 rpm. After some discussion, Minnkota also chose a 10-foot tall mast with a crowd stroke of 6-feet and a 32-foot digging depth. The drill also has 14 degrees of side tilt (7 degrees per side) so it can easily work on uneven terrain.

GNSS was a different challenge altogether. Tippett recalled, “We had always wanted to enable GNSS on our drill attachments, but thus far hadn’t found anyone that could enable it.”

So he began making calls. “After limited interest from most everyone in the tech space, someone pointed me to Trimble and SITECH Dakotas out of Bismarck, North Dakota—who were excited about the opportunity. They said they’ve put GPS on blast hole rigs, why not a drill rig?” he said.

Once the Groundworks system was installed on the EX40-equipped excavator, SITECH spent a little time training operators how to use the in-cab system. 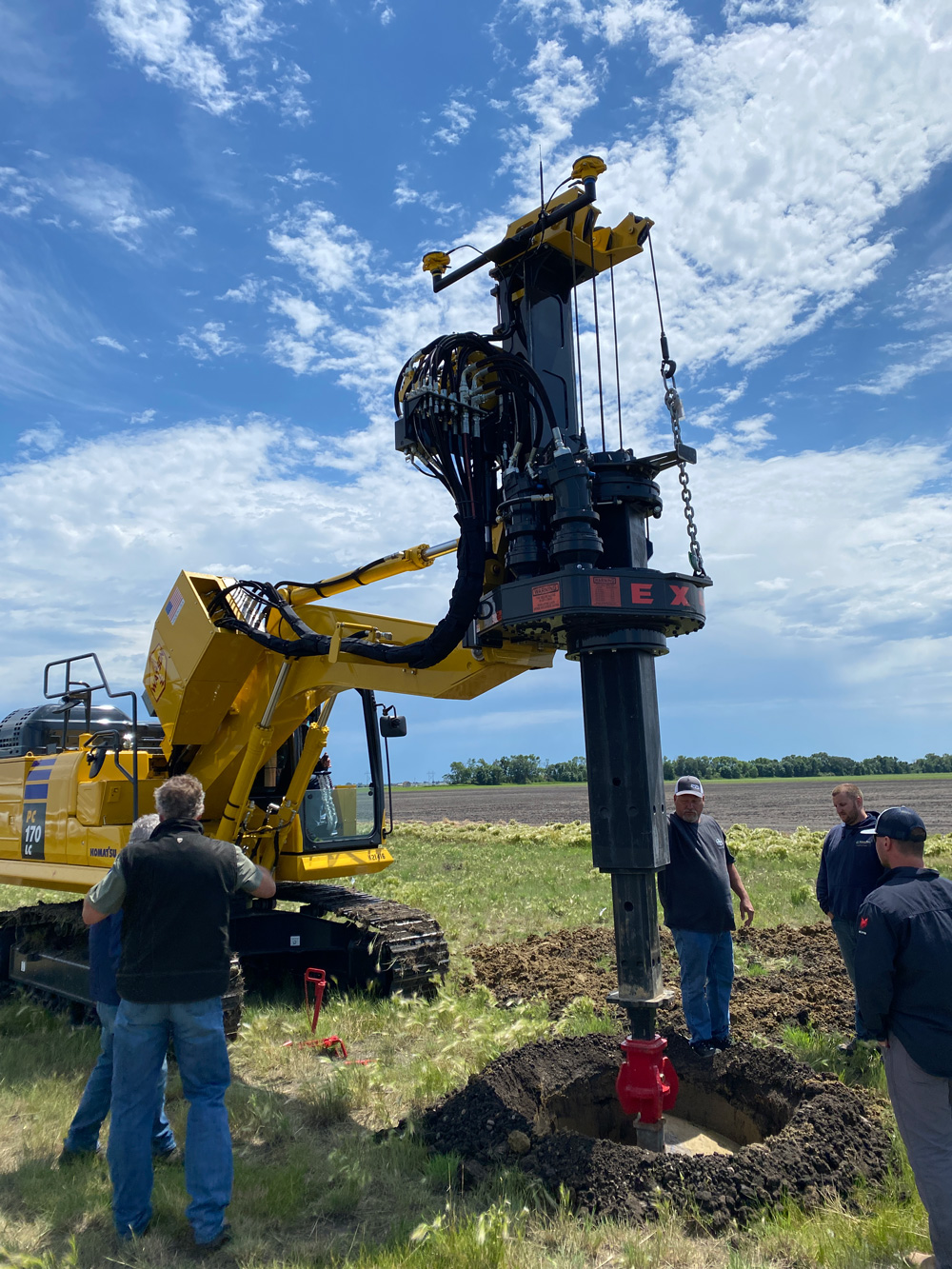 Prior to putting the GNSS-enabled EX40 to work, Bushy generated the pile location positions in Autodesk Civil 3D, transferred the pile plan to Trimble Business Center and then synced to Groundworks on the machine. At the site, the operator took advantage of a virtual reference station (VRS) network to position the machine with high accuracy.

In North Dakota, the team used the Trimble VRS Now service for high-accuracy corrections delivered via cellular network to improve productivity, which eliminated the need for a base station. In Minnesota, they use the MnCORS Network. MnCORS is a cooperative effort between MnDOT, other state agencies and institutions, counties, cities, tribal organizations, universities, and private enterprises to provide GNSS corrections state-wide with overlapping coverage.

“Using published coordinates from the VRS networks in this territory is incredibly efficient. We can load the projects in before the machine leaves the yard,” add Bushy.

With positioning and navigation in place, Minnkota, SITECH and Watson Drill Rigs moved the GNSS-enabled EX40 to a distribution substation in rural Finley, North Dakota, a site that was undergoing reconstruction. The challenge at the Finley site was to dig eight holes as quickly and accurately as possible.

In the cab, the operator turned on the Groundworks system and navigated to the first position—and he was off. The operator completed the job in under six hours with efficiency, accuracy and improved safety thanks to the long reach.

“Once the system was up and running, our operator had all eight holes done in under six hours,” said Bushy. “A skid steer would take one to two hours to dig just one hole, on average. Operators just love it. It has eliminated the spin-and-dump cycle that takes so long with a skid steer, and they don’t need a spotter. Our operator was impressed with how accurate it was.”

Tippett, who also attended the inaugural GNSS-enabled EX40 job, agreed, “I didn’t know what to expect. But from the very first pin, it was impressive—all without a base station!”

Bushy says the ROI is difficult to calculate, but they already know the technology is invaluable. “The return on our investment is a bit intangible, but definitely worth it,” he said. “Locating a hole incorrectly is costly and time consuming to fix. This system pretty much eliminates that possibility. There are also some clear time savings in that we’ve eliminated the need to establish survey centerlines and repositioning support.”

Looking ahead, Bushy said he believes that the crews will be able to get more holes drilled faster and potentially do more work with it. “We’re pleased with the solution that Trimble, SITECH and Watson Drill Rigs came up with,” he said. “I see this system having widespread benefits across our substation and transmission line improvement and expansion projects. That’s where we’ll put it to work this fall.” 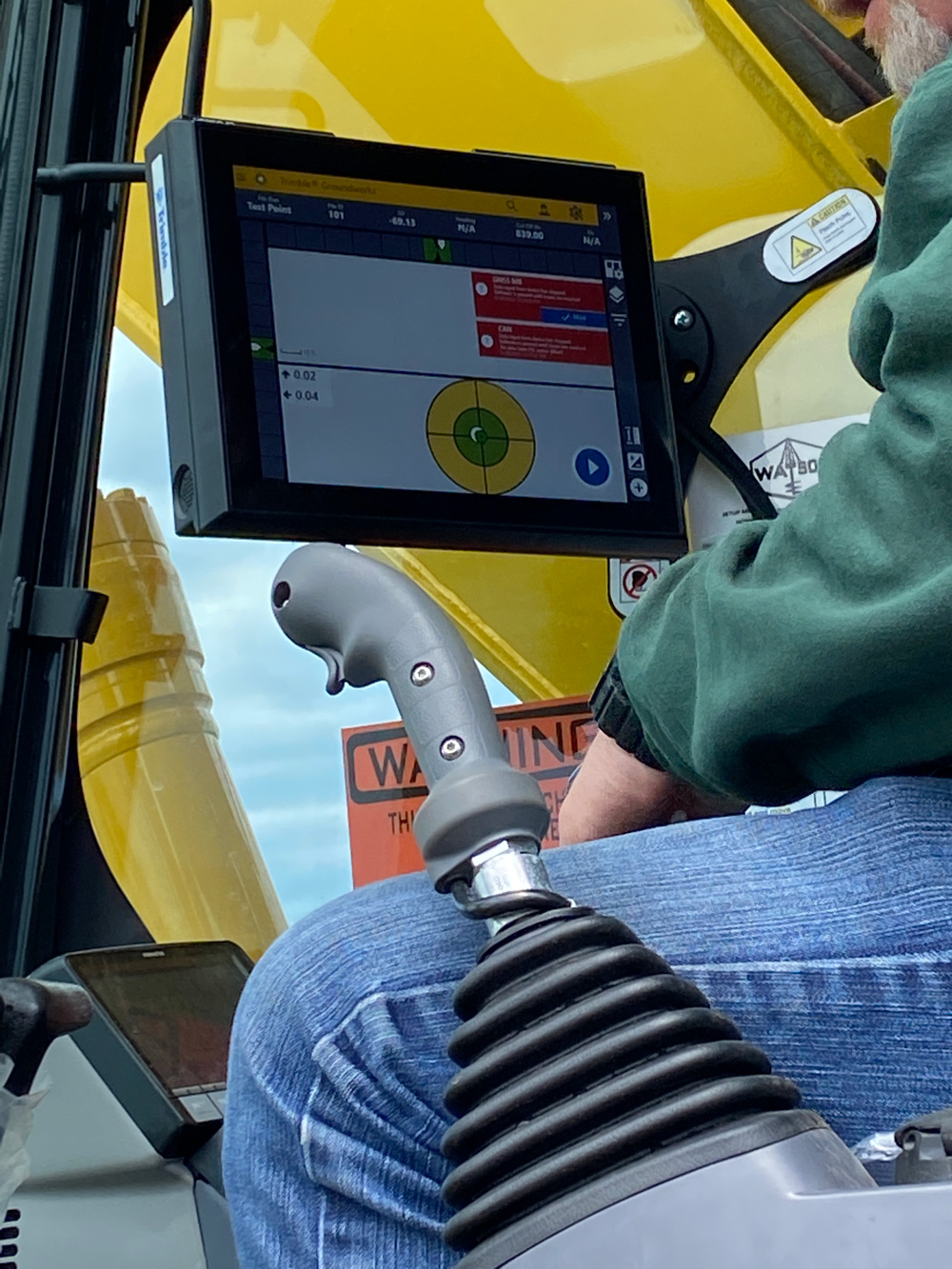