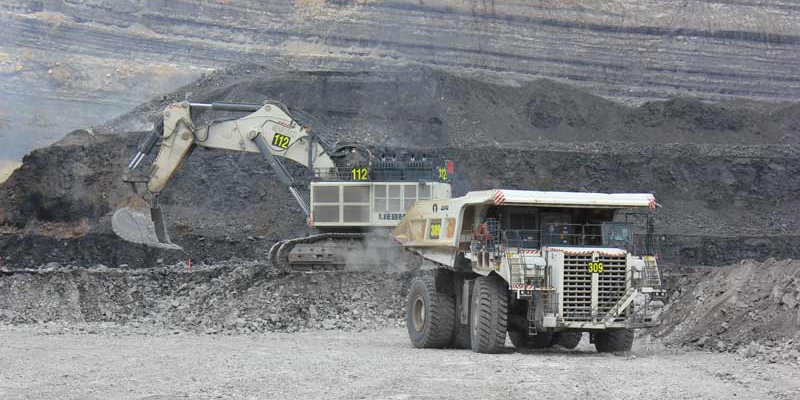 Liddell Coal relies on the onboard haul truck scales to verify payload, but the haul truck weighing system requires the truck to move away from the excavator before an accurate measure of payload can be given.
This retrospective view of payload has proven an issue for Liddell Coal because an over or under loaded truck cannot be easily adjusted. As a result the current weighing process can lead to payload variance between trucks, slowing down the trucks travel dump cycle.

LOADRITE installed the X2650 on the six mining excavators for real time payload information to ensure each haul truck is loaded to its optimum weight. This bucket by bucket payload system enables the operator to load every truck to its optimum capacity before it leaves.

Liddell Coal has increased productivity as a result of the new way of measuring payload. The X2650 has made loading haul trucks more accurate by allowing the excavator operator to know the payload of each bucket before loading it. This process has optimized the loading cycle, lowering the costs per ton moved.
Prior to the X2650 overloaded trucks were forced to dump their load and return to the loading area. If they were unable to dump early, then the trucks onboard payload monitoring system would cause the truck to become speed restricted. The speed restricted loads caused bunching which increased cycle times at the load and dump points. The X2650 ensures each truck is loaded to its optimum capacity and eliminates these issues associated with overloading.

Not only does the LOADRITE X2650 provide a more timely measure of payload, but it is also more accurate than typical haul trucks scales. With a 3% margin of error the X2650 consistently provides an accurate and reliable weight, compared to the 5% margin of error on haul truck scales, visible only after the truck starts moving. Trucks scales also require proper strut maintenance in order to achieve this level of accuracy.

When down-time can cost a mine a substantial amount, the X2650 will be important in protecting the valuable machines at Liddell Coal. By accurately loading each truck Liddell Coal reduces the stress on haul truck components caused by overloading, potentially reducing maintenance costs.
LOADRITE has an expert team that understands the demands of the mining industry and provided Liddell Coal with responsive local support. LOADRITE was able to fit in with the tight schedule on which these machines operate, installing and servicing the system during the machines standard maintenance schedule.
The system has had no impact on operator performance. The excavator operator loads trucks without a change to the loading cycle, while the scales total the weight of each bucket to determine the haul trucks total payload.

The LOADRITE X2650 improves your productivity by accurately weighing each bucket when loading haul trucks. Knowledge of payload as trucks are loaded means reduced turnaround, shorter cycle times and decrease wear and tear on the haul trucks. Like all LOADRITE products, the X2650 delivers real financial benefits.