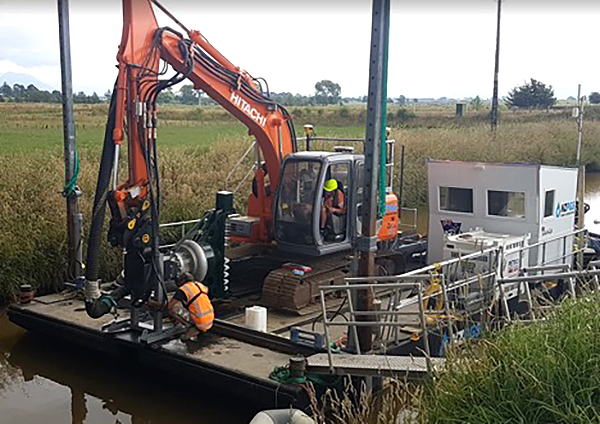 Working under a consortium headed by EnviroWaste Services Limited, NZPGS was hired for a large-scale canal remediation project for Whakatane's Kopeopeo Canal in New Zealand. Because of the complexity of the dredging required, coupled with extensive decontamination work ,NZPGS,s engineering team turned to SITECH NZ and Trimble Marine for help with positioning and 3D real-time visualization of work.

For the Bay of Plenty community, located off the northern coast of New Zealand's North Island, the decision to clean up the Kopeopeo Canal has been a long time coming. The contamination is a legacy issue that is associated with discharges from a former sawmill. The canal was contaminated between the 1950s and late 1980s because of storm water discharges from that sawmill, which treated timber using pentachlorophenol (PCP). The result was the release of dioxin-contaminated sediment into the waterway. With direct support from the community, the Bay of Plenty Regional Council leaders, and the Ministry for the Environment through the Contaminated Sites Remediation Fund (CSRF), NZPGS was hired as a subcontractor to help safely remove and treat the industrial dioxin pollution, thereby restoring the Kopeopeo Canal and the Whakatāne River. Among others the Director at NZPGS Ali Stewart worked alongside Wayne Plummer from ESL Envirowaste to manage the details of the remediation project contract.

Over the course of several years, the multi million (NZD) project is designed to remove, safely store and bioremediate up to 40,000 cubic meters of canal sediment, spanning, in total, a 5.1-kilometer section of the canal. NZPGS was hired for its cutter-suction dredge methodology and marine geophysical expertise.

The team determined the solids collected by dredging should be carried with water from the waterway into a pipeline, instead of trucks, which is sent directly to the containment site. For a complex dredging and remediation project of this caliber, the NZPGS team contacted Paul Miller at SITECH NZ for help. SITECH NZ is the region’s Trimble authorized dealer and construction technology partner. NZPGS was interested in Trimble’s precise positioning capabilities from HydroPro Software, as well as Trimble Marine Construction (TMC) software.

“We knew that we needed accurate positioning for our excavator and dredge working from the barge in the canal’s dredge zone,” said NZPGS. “We had an idea of what we wanted to do, but Paul and the folks at SITECH helped us really bring it all together. They saw the vision and brought in all components, helping with installation, training and technical support of our Trimble products, offering us a complete solution.”

Prior to the dredging work, Trimble’s HYDROpro software was used to carry out a pre dredge hydrographic survey of the channel to define the profile of the proposed dredging work, indicating target depths the operator needs to reach. NZPGS points out it was particularly challenging because of the Kopeopeo Canal has primarily a clay bottom, which is prone to erosion.

The system is based around the Trimble GCS900 Grade Control system with an additional dredge head sensor to track the alignment of the underwater dredge head. SITECH NZ coordinated an interface for the Trimble hardware with TMC software. They installed the new system, consisting of the Trimble GCS900 Grade Control System, Trimble CB460 display computers, monitors, cables, antennas and other peripherals. TMC software displays real-time visualization of the dredge head relative to the design. TMC software then displays 2D and 3D profile information, grade guidance, and warnings for the operator.

With the Trimble marine equipment and barge-mounted dredge,NZPGS began dredging the canal in January 2018. NZPGS explains that the equipment works together, aiding in precise marine positioning and allowing the operator to ‘see’ under water and dredge to a 3D design by tracking the dredge head over a design shape. Controlled by the operator, the dredge unit sucks up the sediment and water from the canal into a pipeline, where it is transferred to the containment site. After working out some kinks and refining the process, the team has completed approximately 580 meters of dredge work for the 5.1-Kilometer section of the canal. We estimates this phase of the project to take around 150 days or so to complete and it’s on track thus far.

“SITECH helped us put the design profile into our gear as well as our target depths and our cut design profile,” said Baynton. “Looking at the TMC display we have a drawing of the digger in real-time as we move the dredge head up and down. We go down to our target depth, r and record that information and we can see it all in real-time on the screen. It gives us sort of a ‘roadway’ to follow under the water.”

NZPGS explains that in TMC, the team has set over-dredge and under-dredge tolerances on the profile view of the dredge head. The cut design profile is represented by a red line and the design depth is represented in green and includes the bottom of toxic layer from the core sample survey.. This 3D picture shown on the on-board screen gives the operator a clear visual of where he needs to position the dredge head underneath the water with a goal of removing material down to the green line but not lower than the red.

The NZPGS operator was new to the Trimble software, but he was able to pick up on it pretty quickly,. With the real-time information NZPGS get from Trimble and SITECH, it’s pretty much a matter of joining the dots on the screen. NZPGS know that we can keep digging until we reach our depth and it turns red, so it’s coloring between the dots and where able to work very accurately and quickly now.”

As NZPGS continues its dredging efforts they continue to work closely with ESL Envirowaste and the Bay of Plenty Council leaders to efficiently communicate and collaborate with the project leaders and the community at large. Part of the process includes regular progress reports regarding the dredging progress and bioremediation efforts. With support and guidance from SITECH, NZPGS are able to extract on-going as built dredge data from TMC software and compare it with the levels of the canal’s top and bottom sediment volumes. From here they can calculate various material movement and monitor dredging progress compared to the design. Data captured in TMC is synced with Trimble Business Center- HCE and reports are shared via Dropbox with the client on a daily and weekly basis. Projects leaders believe this level or accurate and ‘real-time’ reporting brings a critical level of efficiency and transparency to the project.

Trimble has a range of solutions for dredging, placement, hydrographic surveying, visit trimble.com/marine to learn more.