Customer Profile: Established in 2010, Integrated Sustainability is an employee-owned sustainable infrastructure delivery and operations company with extensive expertise in all aspects of water, waste, and energy infrastructure design and execution. 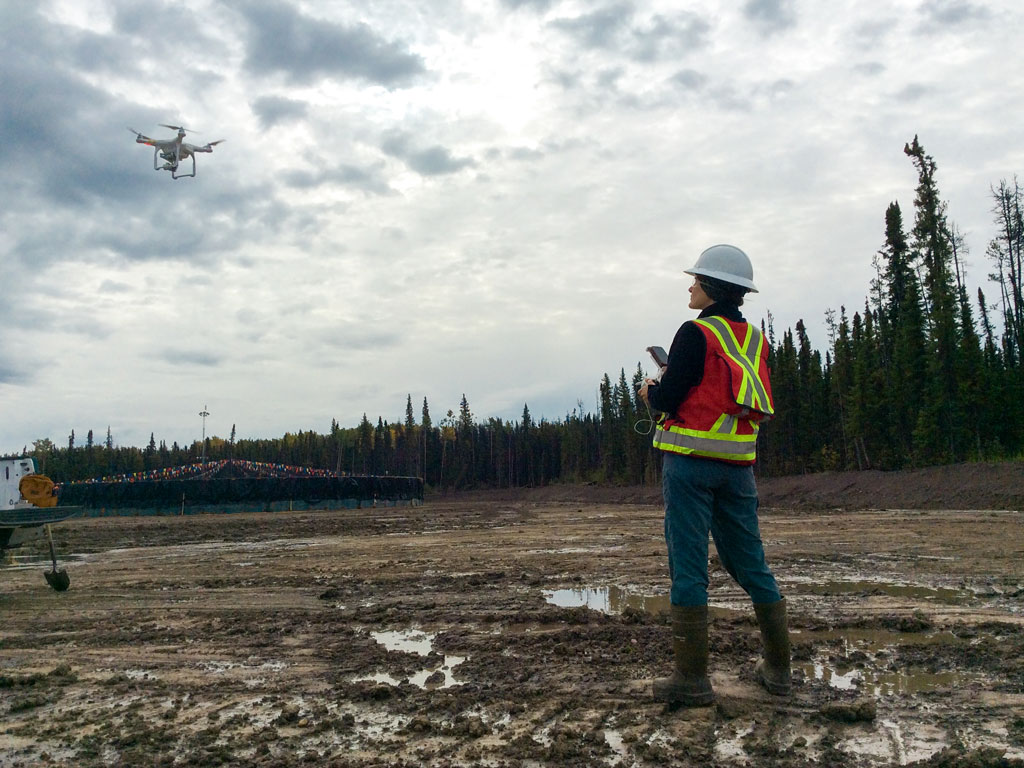 From sourcing strategies and regulatory approvals to design, construction and process optimization, Calgary, Canada-based Integrated Sustainability is one of the top providers of lifecycle water, waste, and energy solutions.

Key to the turnkey engineering and construction firm’s success has been its willingness to adopt and adapt to new practices that deliver better outcomes for clients—especially on the jobsite, where schedule and budget can easily slip. That flexible mindset has facilitated a significant technology evolution in the last year that has helped the company expand its services from largely design, construction management and quality assurance/quality control services to complete earthworks and construction services.

“In our role as construction managers, we have had an inside perspective at the inefficiencies of conventional construction practices,” explained Barry Prystawski, Director of Engineering and Construction for Integrated Sustainability. “We believe there is a way to use today’s technology to execute projects more efficiently, lowering costs and delivering better outcomes.”

With that experience in mind, Prystawski and his team sought to expand their services to include heavy civil construction and earthworks in 2019. The expanded services would be built on lessons learned about productivity and quality with help from 3D machine control. In parallel, then new hire Geomatics Manager Kris Kwiatkowski was looking to apply his extensive experience in field technologies such as UAVs, laser scanners, mobile mapping, ground penetrating radar and hydrography to improve survey workflows.

All three believed an upcoming project for an oil and gas company could serve as an ideal pilot test for these advanced systems. Cautious about cost and complexity but curious, Smolik contacted the local Trimble dealer, SITECH Western Canada, to talk 3D machine control.

Representatives from SITECH jumped on board, with SITECH offering to ‘tech out’ the project with 3D machine control systems.

For Integrated Sustainability, this first step was the beginning of a company-wide shift that has positively affected every facet of the company’s services.

The pilot project entailed the design and construction of a 100,000-cubic-meter freshwater reservoir in Northern Alberta.

While Smolik was all in to try 3D machine control, the drone seemed like a big investment for an uncertain reward. Kwiatkowski disagreed and explained that drone survey data is a fundamental piece of how project managers visualize, manage and use data across the project and throughout the project lifecycle, which would reduce the cost of each individual component. 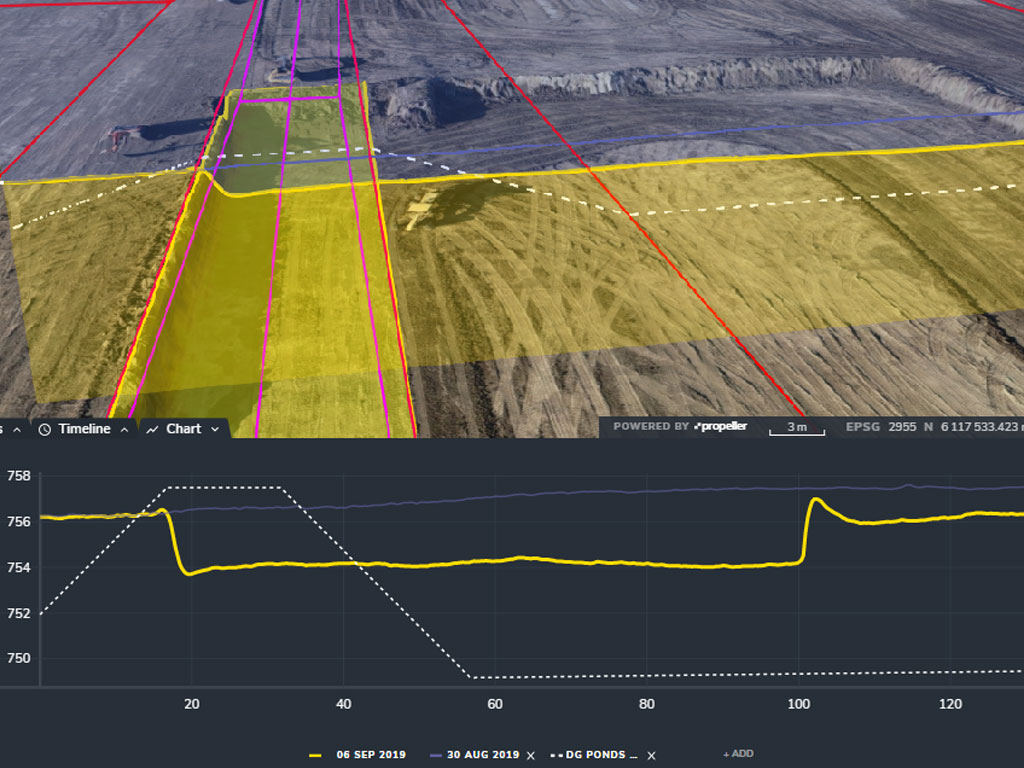 “The potential of these systems is not the individual capabilities—though those are terrific; it’s the ability to tightly integrate all of them so that data flows between them as needed,” Kwiatkowski said.

By early April, SITECH and the Integrated Sustainability team were onsite with all the equipment and technology ready to go – and connected. The data created on the machines or gathered by the drone moves to Trimble Business Center and Trimble Connected Community (TCC).

“For the first time, we had a single source of data in TCC that moved as needed to the cloud or to the field,” said Kwiatkowski. “The data is all stored in the cloud and accessible by all the other connected systems.”

The power of these connections became readily evident soon after reservoir excavation began.

The overall construction of the reservoir was scheduled to require about 30-40 days in the spring of 2019. Operators were excited to use 3D grade control, particularly Trimble Earthworks, because of the larger screen and easy-to-use interface.

Smolik confirmed, “With little training, we had the capability to go to the final grade right out of the gate. The GPS on the equipment wouldn’t let them miss extents of excavation, fill zones or elevations. Further, I could validate that my crew was building the reservoir exactly to the design.

The software also allowed the project manager to see data in the moment including cycle times, and payload and make real-time decisions with no loss in production,” continued Smolik. “Further, I was able to provide updates with actual, current production numbers, and we were able to measure actual costs, so we knew we were on budget.”

In one case, crews had blocked out nine days to complete the excavation of a trench. “We were done in three, thanks to machine control,” Smolik said.

“One of the big advantages of digital technology should be data management,” said Kwiatkowski. “As part of this pilot project, we were really looking to see if we could not just cut the time it takes to get information to our office, but limit the time we spend developing spreadsheets and checking numbers from various sources before sharing with project managers and clients.”

Enter Trimble Stratus. Kwiatkowski flew the drone daily at the reservoir site. “The resulting data removed a lot of uncertainty about project progress and as-built conditions. We were able to regularly validate milestones and communicate with the client about every phase of the project. Combined with the machine control data, we had a single source of truth.”

That single source of truth became particularly valuable when the client looked to make a mid-construction adjustment. As crews were finishing the excavation of the reservoir, the owner asked to revise the engineering plans that called for rainwater runoff to go to the north side of the reservoir. Instead, he wanted the rainwater to go into the local ditch at the other end of the property.

Ordinarily, that adjustment would have required a site survey of existing conditions, a revised cut-and-balance model and a re-assessment of available materials, and about 6,000 cubic meters of material to refill the area where the runoff drain was originally dug—and of course, the request came on a Friday afternoon. 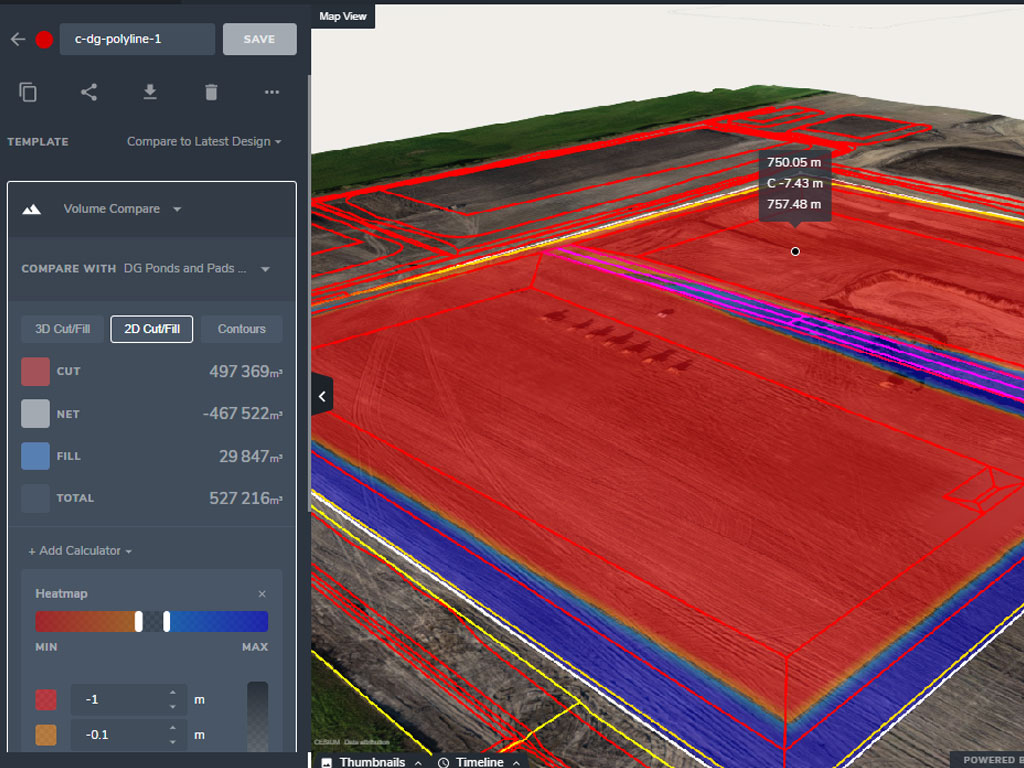 Instead, Kwiatkowski logged into Trimble Stratus to see the existing site conditions as compared to the updated design, and after checking the daily load counts, he was able to determine that crews still had more than 7,200 cubic meters of material to remove – more than enough to replace the northside area. He recalled, “Gathering this information took about 30 minutes and allowed our team and the client to proceed without any delays in construction activity, which could have resulted in extra cost, machine downtime and schedule delays.”

On the Fly Adjustments

On a daily basis for the reservoir project, Kwiatkowski used the data from the aerial and ground sources to check progress and prepare reports—a capability his Director of Engineering and Construction Prystawski greatly appreciated.

Prystawski noted, “The use of Stratus allowed seamless communication between engineering and construction, something particularly valuable when working to a tight schedule and uncooperative weather.”

In the 30-day reservoir build, the team had to deal with 12 rain days. Kwiatkowski said, “By leveraging the data in the machines and in the air, we were able to adjust grade in real-time and see water accumulations much faster.”

On the reservoir project, Smolik said, “We lost no productivity, no downtime and everything moved. We reduced cost, beat the schedule and came in under budget. We reduced our idle time and fuel consumption; we reduced all of those costs associated with the job. I estimate that we increased our production in the neighborhood of 30 to 45%.” 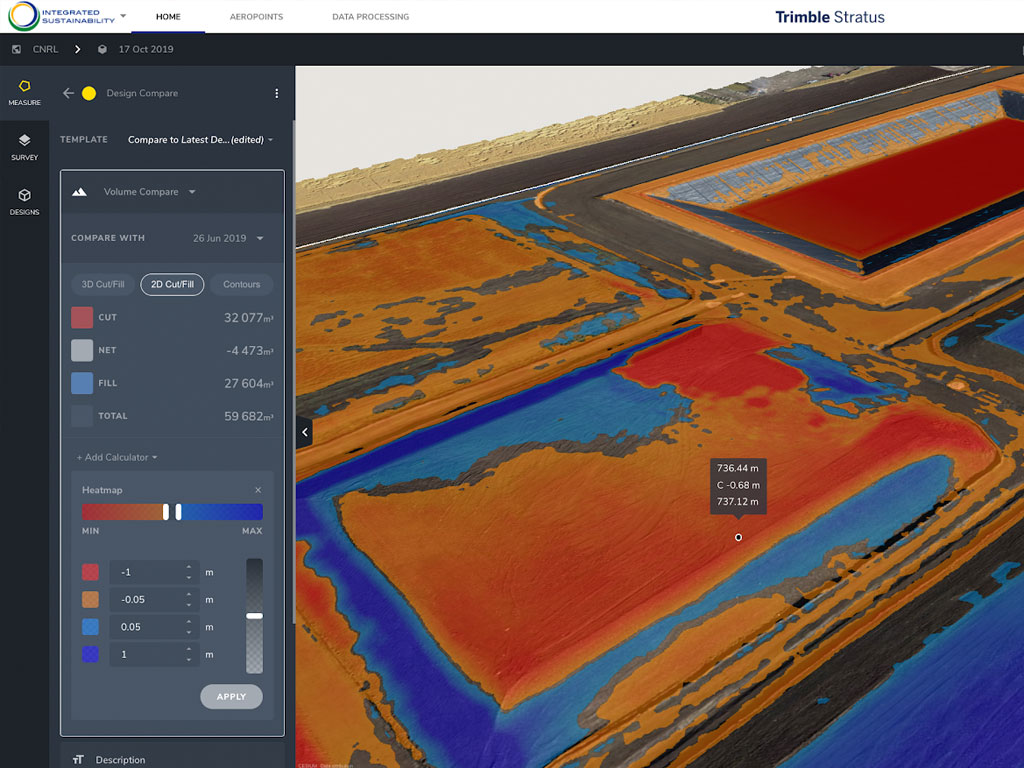 Since the initial technology pilot project on the reservoir in 2019, Integrated Sustainability has continued to expand its capabilities. All earthmoving machines are equipped with full GNSS 3D machine control, and the drone continues to be used as a progress tracker and quality check on various jobs.

Not long after the reservoir project, Integrated Sustainability put Trimble Stratus to work on another project. In this case, the company was serving as the owner’s representative on a pond construction project.

The quality assurance engineer called Kwiatkowski, who sent the drone up to survey the site and 24 hours later, the quality assurance engineer was able to show the owner that the as-built site didn’t match the engineering design. Kwiatkowski said, “In a very short time, I was able to overlay the Stratus images with the design file. It was readily evident that the construction crews had excavated the center berm between two ponds, because the boundary survey markers were incorrect.” 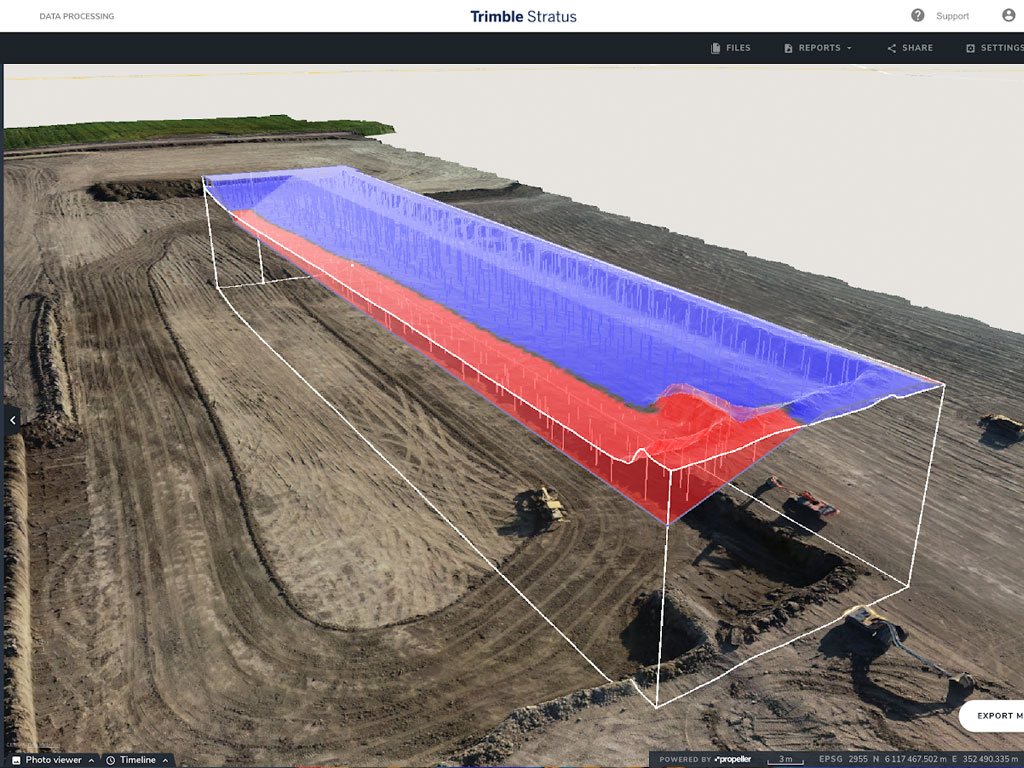 Once the visual data was provided to and confirmed by the owner and the contractor, earthwork crews began the rework. The good news was that instead of having to replace 30,000 cubic meters of dirt to rebuild the berm, crews only had to replace about 6,000 cubic meters.

Better communication, transparency, responsiveness, and effective change management has reinforced the potential of 3D technology for everyone at Integrated Sustainability, from engineers to equipment operators.

Kwiatkowski confirmed that the aerial surveying has become an important tool in the company’s survey and measurement toolbox that can provide value across the lifecycle of project, a perspective that is echoed by Prystawski.

“Many times, we’re involved in preliminary studies and site selection through engineering, constructability reviews and construction,” he said. “The drone data in particular, provides significant value and transparency to everyone involved in the process. For me, it’s a tremendous timesaver. I used to spend hours reading reports and asking questions to get the full picture of issues on a project. Now, I have everything I need within an hour or two at most—and the data is accurate and current.”

Kwiatkowski agreed, adding, “Our reputation is built on our ability to provide lump sum bids and in some cases liquidated damages, guaranteed schedules and how to be agile if there are challenges, like weather delays. With technology, we can make faster, better decisions.”

Kwiatkowski explains, “Initially, we think this will be good quality assurance because project managers can design linework in the context of the project. But we also see it giving the construction managers tremendous opportunity to spot check measurements. We don’t typically have surveyors on site, so our project managers can use SiteVision to verify conditions with very good accuracy—a way to bring more intelligence to the field. We call it our Stratus on the ground.”

Prystawski summed up the last year of technology evolution simply stating, “Leveraging 3D data on the ground and in the air has provided us immeasurable value and opportunity—and it is our execution strategy from now on.”