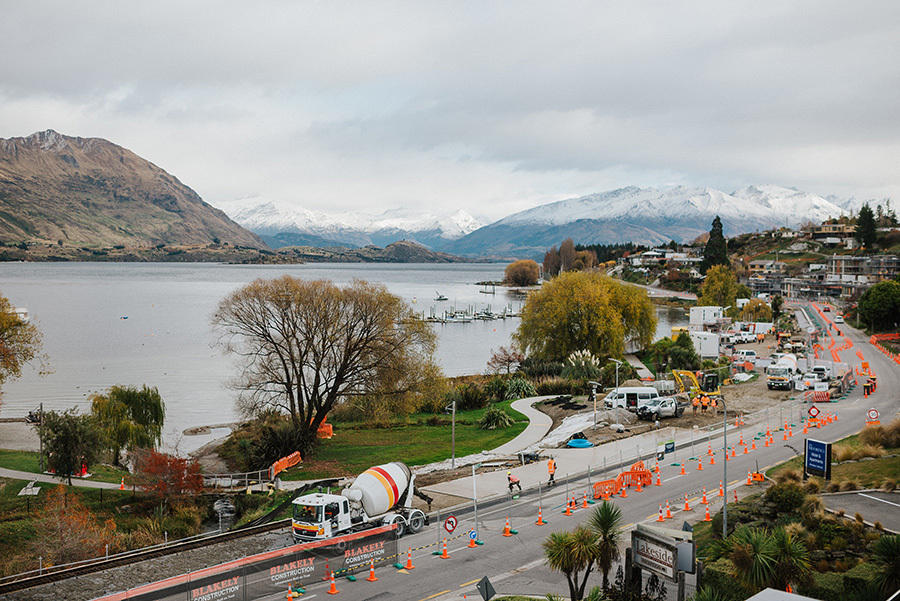 Customer Profile: Founded in 1995, Rolleston, New Zealand-based Blakely Construction is a civil contractor serving Canterbury and surrounding regions. The firm’s many services include earthworks, roading, drainage and civil works on projects that range from public open spaces to healthcare facilities, largely in the Canterbury region. This award-winning company has become a construction market leader by embracing advancements in technology and implementing systems and software applications to enhance the delivery of quality construction projects.

Business Challenge: Communicate progress on the $3.7 million Wanaka Lakefront Development Plan to the client and stakeholders. 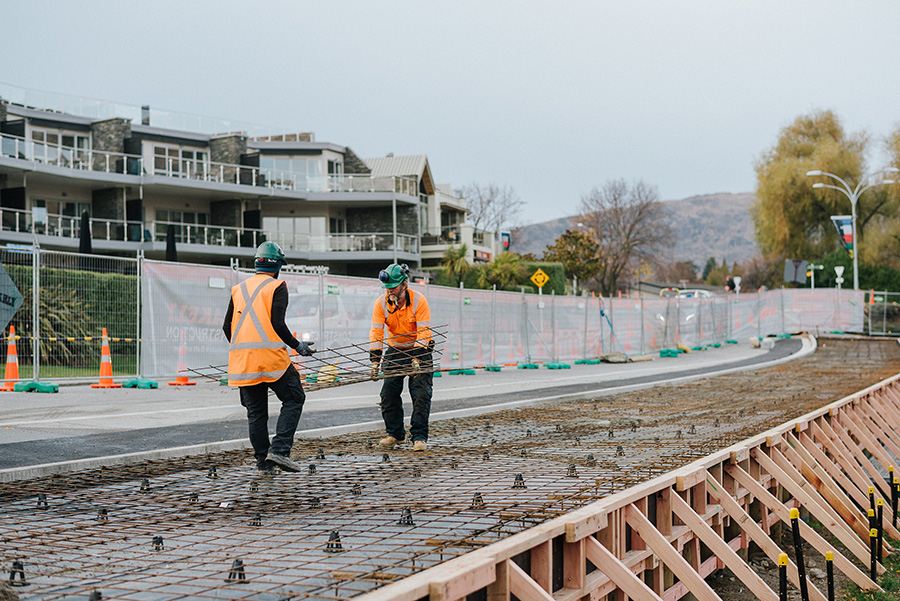 The South Island town of Wanaka, New Zealand, about an hour’s drive from Queenstown, is a popular lake and mountain resort community situated on Lake Wanaka and in the shadow of Mount Aspiring National Park.

In an effort to modernize the community’s central lakefront, the Queenstown Lakes District Council and Wanaka Community Board initiated the multi-year $3.7 million Wanaka Lakefront Development Plan. Key objectives of the plan are to restore and develop native vegetation to maintain the lakefront's rugged, wild landscape, improve and expand a shared pathway for pedestrians and cyclists, and the construction of a lakeside boardwalk.

The current phase of the project, which began Feb. 1, 2021, is focused on the approximately 1.7km central lakeside.

Key components of this phase include:

For the principal contractor, Blakely Construction, it’s exactly the type of high profile, comprehensive and community-oriented project at which the company excels. The Rolleston, New Zealand-based civil contractor’s many services include earthworks, roading, drainage, and civil works on projects that range from public open spaces through to healthcare facilities, largely in the Canterbury region.

Mathew Havill, General Manager for Blakely Construction, noted, “While the Wanaka project is outside of our usual geographic work area, we felt we were well-equipped to achieve the client’s goals.”

The project is about a five-hour drive from Blakely’s headquarters, which could create some logistical challenges. “Taking on a project that’s outside our region comes with risk,” said Havill. “One of those risks is our ability to set out positions as needed over the course of the project. It would be costly to have one of our team members drive to the site multiple times or to pay a third party to do so. Another challenge was maintaining communication with the client and the community as questions and issues arose.”

“Initially, I wanted SiteVision mostly because I thought it would help bring our clients on the journey with us as we built projects,” Havill explained. “We found it could do so much more.”

Coordinate, Communicate
The key to Havill’s decision to use the augmented reality system was access to a 3D model.

“We learned early in the tendering process that the Queenstown Lakes District Council had the foresight to 3D model the boardwalk with considerable detail,” said Havill. “The use of SiteVision to compare as-built with as-designed would provide us with a great resource for community engagement.”

That expectation proved accurate in the first kickoff meetings with the Wanaka Community Board.  “As contractors, we’re very good at envisioning how projects come together, but that’s sometimes difficult to portray to clients and the community in a visual way,” said Havill. “With SiteVision’s AR capabilities, we were able to draw them more into the process by providing clear visuals about how each piece of the project would come together, including, in this case, the interaction between hardscape and vegetation. And the structural engineers were very excited that someone was going to use their detailed models.”

It also allowed the Blakely project team to highlight areas of potential concern so that decisions could be made in advance. “That’s been a real positive for us already,” noted Havill.

In one instance, the technology was used to assess potential concerns during early site assessments. The Lake Wanaka boardwalk runs along the shoreline with a vertical bank in some areas with a lot of existing vegetation. He continued, “We knew there were concerns about the local ecology, but we were able to show the client and community how that vegetation interacted with the boardwalk—and more importantly, get clarification about removal. SiteVision allows us to communicate those areas that need more detail with clarity.”

But it’s SiteVision’s survey capabilities that have provided unexpected value. 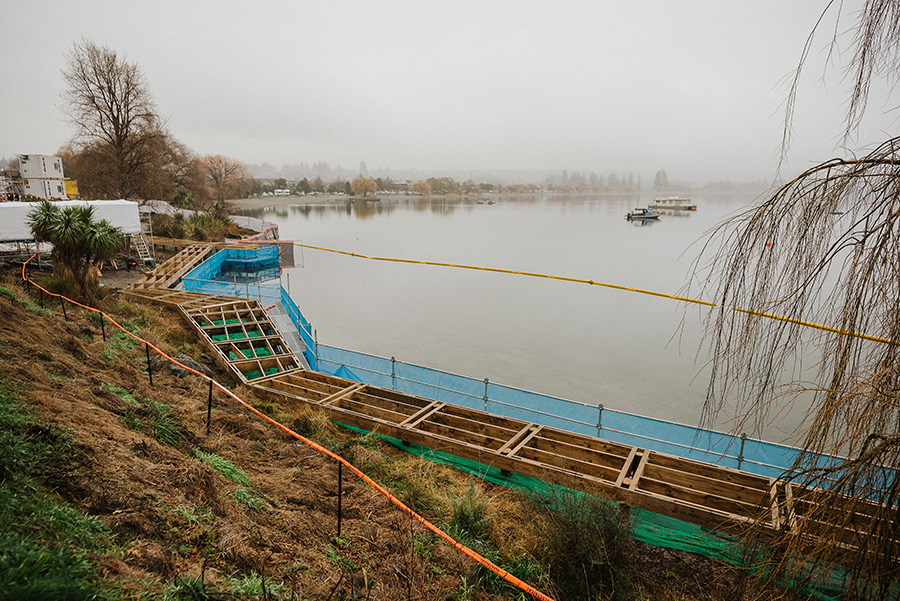 Beyond Visual Acuity
The geographic distance from the Blakely home office severely limited the opportunity for readily available onsite surveyors as the multi-phased project progressed.

Havill knew that SiteVision incorporates centimeter-accurate GNSS, thus facilitating easy and quick as-built and verification surveys, but he wasn’t sure how those capabilities might translate to the Lake Wanaka project team. He explained, “We recognized that we didn’t need millimeter accuracy for this effort, but also that extra resources would be needed to complete the survey setout.”

As it turns out, he didn’t need the extra resource. Lake Wanaka Project Manager Dan Williams was quite surprised by how much surveying could be done with SiteVision and the ease with which this could be achieved. “Particularly given my limited prior experience with survey equipment,” said Williams.

In one case, Williams used the grade control features to support the construction of a footpath with accessibility ramps and landings, an area that had not been fully designed.

“Initially, we thought we would have to bring a surveyor with a rotating laser to the site to set up the accessibility areas,” Williams explained. “But SiteVision made it possible for me to do all of the preliminary setup.”

The Lake Wanaka team has also used SiteVision to design the curb and channels along the boardwalk route. Williams said, “With the engineering data, we designed the curbs in Trimble Business Center, sent it to the client for approval and then sent the approved model to SiteVision for setup.”

Besides the environmental consultant, site engineers, the client and the community board council members have all used the AR solution to follow project progress.

Williams noted, “It takes very little training to get up to speed with the tool and they can wander the site with no pressure. It’s a great demonstration of collaboration and communication.”

Building Excitement
When asked about the value of SiteVision thus far, Havill confirmed, “We’ve saved a lot of time and money with the technology just in surveying. The value has far exceeded our expectations. It has paid for itself just in the ability to bring our clients and stakeholders along on our journey.”

He sees SiteVision as an early opportunity technology, noting that it’s easier to talk about potential areas of concern before starting a project rather than in the midst when it often becomes a time and cost issue. Transitions from existing infrastructure to new construction is one such area.

“We often spend a lot of time chasing details that have not been detailed well,” Havill said. “With SiteVision, we can frontload those questions, and really try to understand your project before you arrive on-site and the potential issues that could impede progress. SiteVision helps us build confidence with the client and stakeholders. It helps tell the story about who we are and what we do.”

Looking forward, Havill noted that the biggest challenge is to get the technology out of Wanaka. He concluded, “Initially, we were just going to use it for early community engagement. Now, if I tried to bring it back, I’d have a battle with Dan (Williams) on the Wanaka project, who sees it as one of the critical tools in his toolkit. Essentially, SiteVision has created its own energy. Our people are very excited about future value.”