After installing Trimble Earthworks Grade Control Platform, a South African earthmoving company achieved production efficiencies way beyond what would have been possible had they pursued the traditional method of earthmoving on the project.

In the construction environment, where every opportunity to save money counts, companies continuously explore methods to reduce costs and improve productivity on projects.

One such company is Advance Bulk Earthworks (Pty) Ltd — trading as Advance Projects — a civil contractor in Gauteng, South Africa, with its core business being mass earthworks and infrastructure. With a fleet of 120, of which only 70 are primary earthmoving machines, the company has seen the construction landscape evolve and change during its past 28 years in business. Director Michiel Christoffel Nieuwoudt who prefers the moniker MC, highlights that it is innovation and the ability to adapt that has kept the company maintaining its presence through challenging times. “If you don’t adapt, seek better systems to reduce overhead and enhance productivity, there is no chance that you will be around for long in this shifting environment,” he says.

It is with this mindset that MC and his associates decided to explore a new technology solution on a recent project for Century Property Developments in the Riversands Precinct that involved massive earthmoving operations.

The project was a mass cut-fill operation, consisting of 320,000 cubic-metres, with batters extending up to nine-metres in height and a platform measuring over 100,000 square-metres on one continuous level. Advance Projects were given six months in which to complete the contract, which was awarded in May 2020 at the beginning of the Covid lockdown, which could have further delayed the start of the project.

When the national lockdown moved to Level 4 in June 2020 however, and road and civil construction were again permitted, it fortunately coincided with the end of the rainy season, “So there was an upside,” he notes.

Nevertheless, the project’s time constraints and the challenging topography required a significant amount of setting out and surveying, so a machine control system appeared as a solution to overcome the challenges, with Trimble® Earthworks Grade Control Platform the only option, in MC’s opinion.

He explains that he made his selection based on consultation with SITECH® South Africa, the local Trimble distributor and other industry leaders: “Going by our market research, the system has a phenomenal reputation for its trustworthiness, reliability and accuracy, with inimitable after sales service and back up,” he says with conviction.

The Sweat of Traditional Toil

Had the Riversands Precinct project proceeded using the traditional earthmoving method, the process would have not only been laborious and manpower-intensive, but the results would not have been as consistently accurate.

Traditionally, as the platform was all on one level, the surveyor would move around on the site taking measurements to ensure accuracy and there would be extra manpower required to ensure safety around the machines and to ensure ongoing accuracy. This time-consuming method adds up to a substantial, but unavoidable expense. Thereafter, the project would have needed a surveyor full-time to take as-built measurements and ensure the quality of completed work.

In addition, reworking areas is commonplace because of human interventions throughout the traditional construction workflow – whether by surveyor or machine operator. This double handling shaves off the profit, not to mention the potential hazard posed to personnel moving around the site in close proximity to large machinery. It was these major considerations that resulted in Advance Projects approaching Trimble and SITECH South Africa.

“We required accuracy and safety; we needed consistency and predictability. That’s what we got with Trimble Earthworks!” MC enthuses.

Advance Projects installed the Trimble Earthworks systems on the primary earthmoving equipment in its fleet, namely two Komatsu PC 300 excavators and two Komatsu dozers, a D65 and a D52.

SITECH South Africa’s Regional Sales Manager, Otto Spreng explains that the Trimble Earthworks Grade Control Platform system is the first integrated 3D aftermarket automatics capability for excavators and that the intuitive software allows operators to customise the interface to their preferred view and various parameters of the system, to match their workflow and site requirements.

MC concurs saying, “The consultant engineer on the project commented that it was the best platform that has ever been handed over to him during his career. And he is not the only consultant engineer to comment so positively on the work we have produced since installing the Trimble systems,” he adds.

On an excavator when automatic mode is toggled, the operator controls the stick, while the system controls the boom and bucket ensuring that the dig remains on grade, reducing over-cut or over-fill and increasing production, while avoiding rework.

With Trimble automatics activated, operators from all experience levels can achieve a time saving of up to 50% along with grading productivity and accuracy, which also serves to increase operator confidence.

One of Advance Projects’ operators Ronny Kunjani comments: “The Trimble system is so efficient; I just go by the plan of the site and the system guides me through it easily. I know exactly what to do, and I know I will be on time.”

MC states that the project moved about 50,000 cubic metres per month and was delivered on time, using fewer machines and less labour than if it had been done traditionally.

Savings on All Fronts

Kunjani adds, “I really prefer this system as it makes the earthmoving process easier. When I first used it, I was afraid that it would be very complicated and I was nervous as I didn’t know what to expect, but I was surprised at how easy it is and the work just flows, and I learned how to use it within a week!”

MC notes, “The investment that we made was definitely worthwhile and it has already paid for itself in increasing productivity.”

Running the Trimble system on the machines, each machine achieved two hours more per day, resulting in more than 20% spike in productivity — while executing perfect levels.

He elaborates that previously the levels were always worked with a grader, averaging about 2,500 to 3,000 square-metres per day achieved.

“With the Trimble-fitted dozer however, up to 5,000 square-metres per day were achieved, falling well within the specifications of the contract’s deadline— on exact levels,” he once again emphasises.

“The operators know exactly what to do and how long it will take without having to rely on someone else to set out their daily work for them,” MC explains. This meant that instead of having a surveyor on-site every day for the duration of the project, thanks to the automation by Trimble Earthworks, the surveyor was required for half-a-day per week, equating to a significant saving, he assures.

Spreng says that through its global distribution network, SITECH services its Trimble customers and ensures that experienced support is easily accessible, along with expertise that has been garnered locally in South Africa since 2006, led by general manager and director of SITECH SA, Mark Smith, who introduced machine control technology to the African continent.

MC says in closing, “With outstanding support from SITECH SA we are fully confident that the investment will see us through the pipeline of work, as and when it happens. In addition, as Trimble Earthworks makes it easier to track time, costs, materials, staff and resources, thereby increasing productivity, cutting costs and delivering on time, I cannot see us ever working without Trimble Earthworks and SITECH SA!” he concludes. 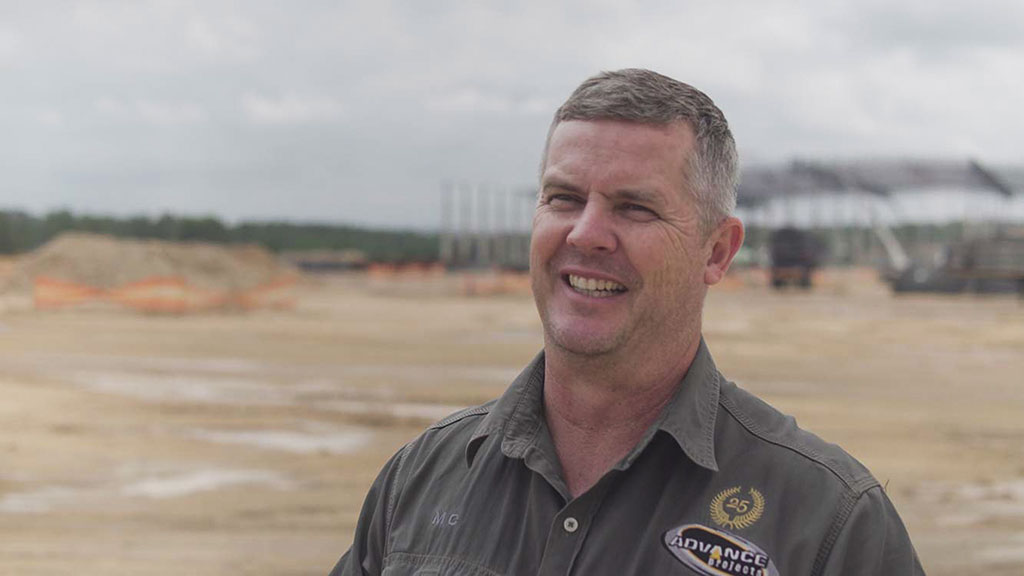 MC Nieuwoudt, director of Advance Projects is so confident of the results obtained by using Trimble Earthworks on his machines, that he cannot foresee ever undertaking a project without using the on-board system for earthmoving. 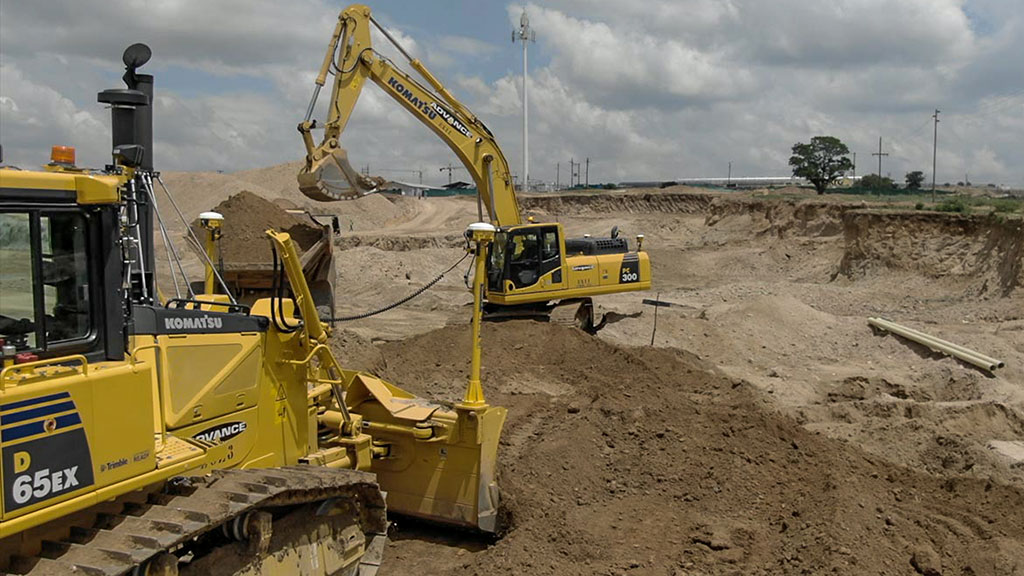 Two of the four machines that have the Trimble Earthworks system installed. The system allowed for 5,000 square-metres of earth per day to be moved, with accuracy falling within 10 to 20mm, ensuring that the dig remained on grade, reduced over-cut and increased production, while avoiding costly rework. 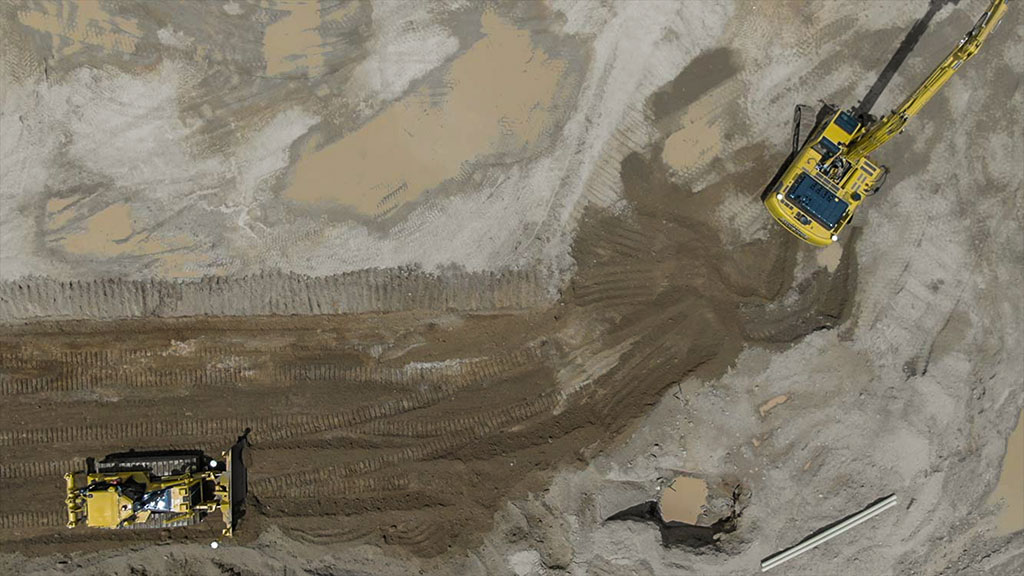 An aerial view of the site showing an excavator and a dozer equipped with the Trimble Earthworks system. The 100,000 square-metre platform was produced to the highest standards with the fewest machines and labour, compared to if the traditional method had been used. Overall, there was a time saving of 50% with improved accuracy and productivity. The project was completed within deadline.