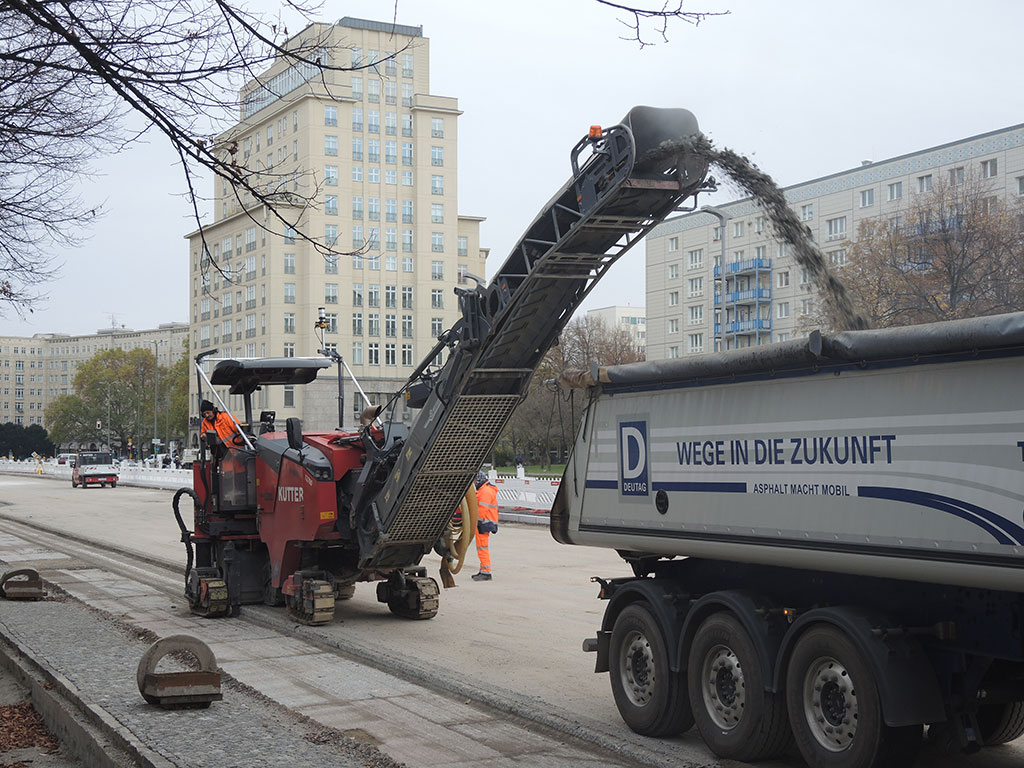 A visit to Berlin is not complete without a walk, ride or drive down the famous Karl-Marx-Allee Boulevard—though it looks very different today from its Stalin-era legacy. Running from Alexanderplatz to Frankfurter Tor, the iconic roadway has undergone a modernization designed to reconnect the 2 km long, 72.50 meter wide roadway with its neighborhood roots.

Over time, the landmark boulevard was dominated by eight lanes of road traffic, including the 18-meter-wide parking strip down the middle. City officials re-envisioned the roadway with fewer cars, wider bicycle paths and attractive sidewalks and squares.

One of the most critical parts of the modernization effort was the removal of the roadway’s concrete layer to a specified level.

From a structural engineering point of view, the profiling of the concrete pavement under the asphalt on the boulevard proved a challenge to the milling contractors. In order to ensure the drainage of rainwater, engineers specified a swinging gutter profile over a length of approximately 800 meters and a width of 5.75 meters.

The engineering plans required the slope to vary between 2.5% and 3.0% at intervals of 3-5 meters. On the remaining 9.25-meter width of the roadway, the profile had to have a transverse gradient of 2.5% from the center to the edge of the roadway. This geometry resulted in a constantly changing milling depth between 0 and 12 centimeters.

Further complicating the job, the Berlin subway runs under parts of Karl-Marx-Allee, eliminating the crew’s ability to use large milling machines for about 75% of the construction site due to load restrictions.

With no longitudinal inclination, the profile had to be reproduced exactly to tight engineering specifications because the targeted drainage of rainwater through a sufficient gradient towards the outer edges is essential for safe traffic routing. 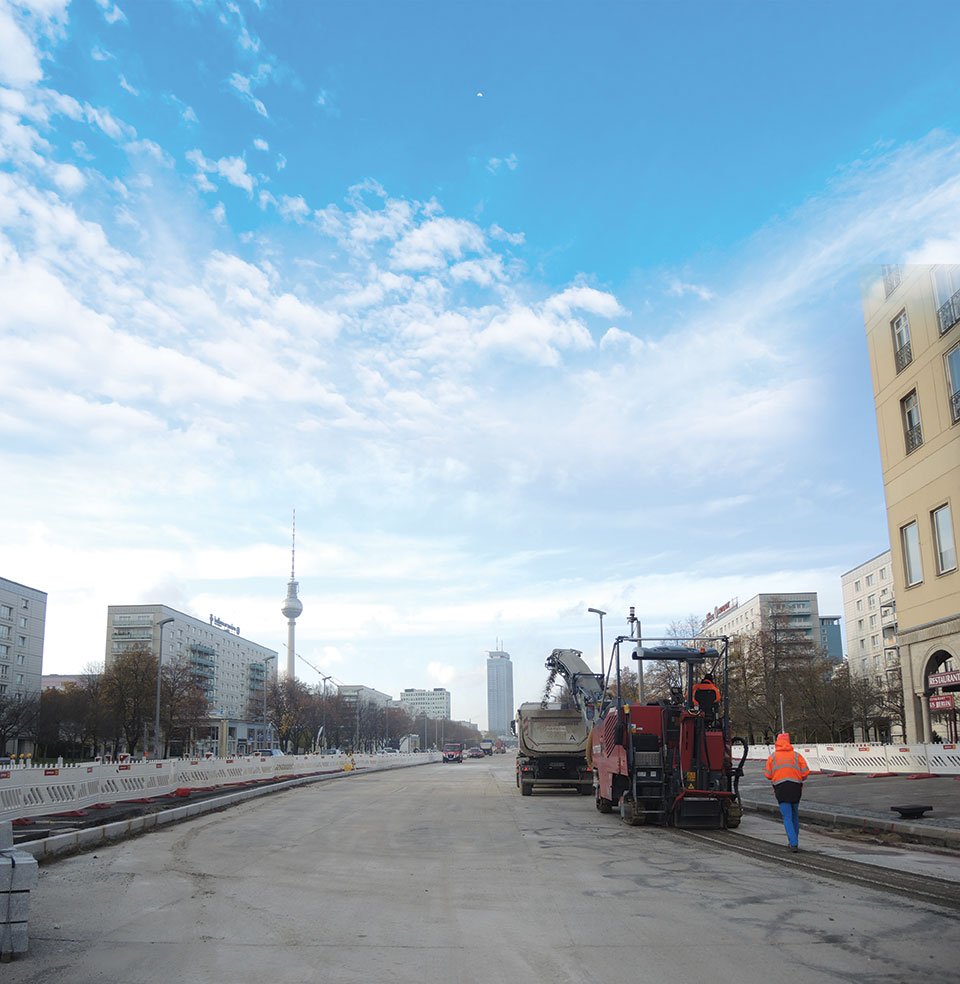 The team of the milling specialist KUTTER, together with the general contractor, Matthäi GmbH & Co. KG, developed a concept for the precise profiling of the pendulum channel into a concrete surface.

The machine of choice was a compact milling machine with a milling width of 1 meter equipped with the Trimble PCS900 3D Milling System. The 3D automatic control system is designed to mill a surface with accuracy to 3 millimeters. In KUTTER’s previous experience, only large machines with a milling width of at least 2 meters are used for 3D milling.

“We’ve been extremely successful with 3D leveling techniques to create new profiles for almost a decade,” explains Roland Schmid, head of the milling department at KUTTER Memmingen. “The 3D version with the total station has proven itself in the most diverse tasks. That's why we were sure that the project in Berlin-Mitte would also be successfully completed in this way,"

After intensive examination of the concept as well as numerous meetings and on-site visits, those responsible at Berlin’s Senate Administration for Environment, Climate and Transport (SenUVK) approved the use of a 1-meter compact milling machine and levelling via a 3D system with a total station.

The decision was made easier by the realization that this concept can also provide cost and time benefits. In addition, according to Dipl.-Ing. Henrik Vierarm, Head of the Road Execution Department at SenUVK, “The State of Berlin is interested in the use of innovative construction methods.” 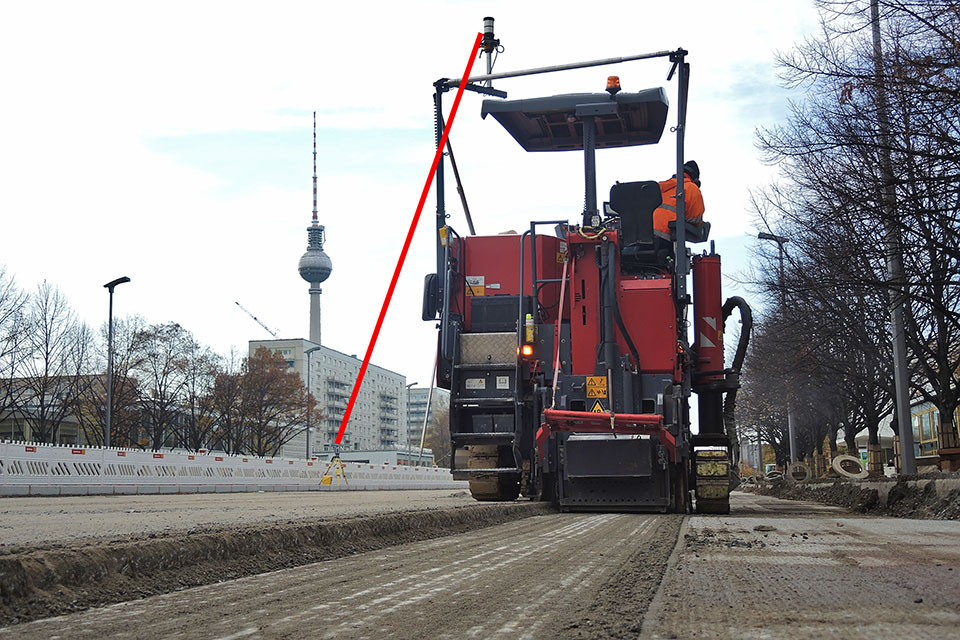 First, KUTTER created a 3D digital terrain model in Trimble Business Center. The upper edge of the future road surface is determined in the model as are the values for the position of the milled surface by subtracting the layer thicknesses.

The relevant data was transferred to the in-cab computer of the cold milling machine. During milling, a Trimble SPS930 Universal Total Station tracks a prism on the cold milling machine. The total station continuously monitored the position of the prism in space and transmitted the measured data to the system computer on the milling machine, thus continually comparing measured heights to target values. The machine reacted to deviations in fractions of a second and adjusted the milling depth accordingly.

“The high points were on average about 10 meters apart. This means that the milling depth changed continuously, but with the 3D milling machine, we were able to produce the profile exactly as planned, because the machine reacts extremely quickly,” says Matthias Dreer, site manager at KUTTER, who accompanied the operation throughout.

The deviations from the terrain model were at most 3 millimeters from the target value. “And that was a full shot—not just when checking with the 4-meter batten,” Dreer adds.

The milling specialists were able to undercut the required accuracy of ± 5 millimeters according to ZTV (German general terms of contract) with ease and created the best conditions for the asphalt pavement. It could then be paved quickly with a constant thickness without the need for time-consuming levelling and without the need for compensation layers.

“The result convinced our main client, the company Matthäi Bauunternehmen GmbH & Co. KG as well as the client of the overall measure, the SenUVK,” confirms Bernhard Fischer, Head of the KUTTER branch office in Duben (Brandenburg). 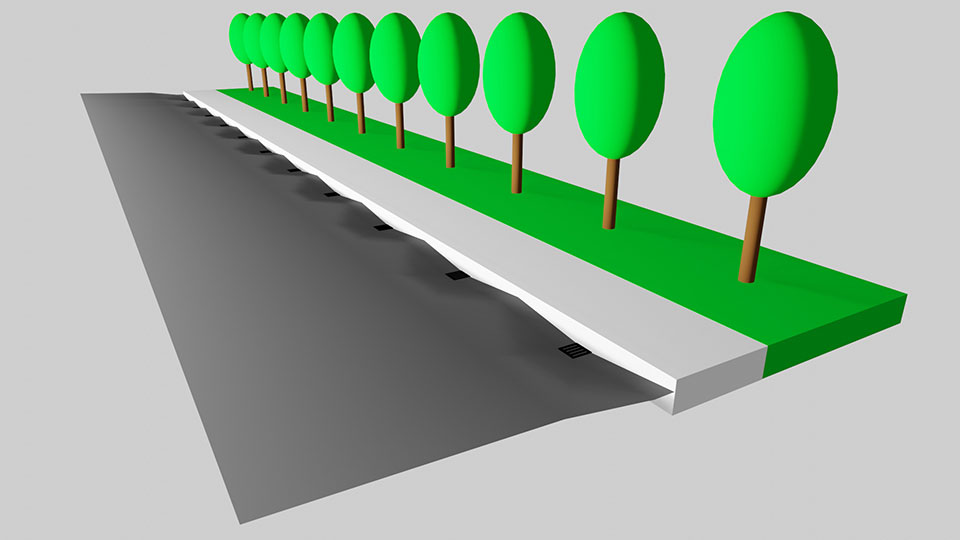 Ultimately, the compact milling machine method was also financially successful. Although 3D milling is more complex than conventional copy milling due to the development of the 3D model, the overall project costs were reduced as there was no need to lay compensation layers and the construction process is shortened.