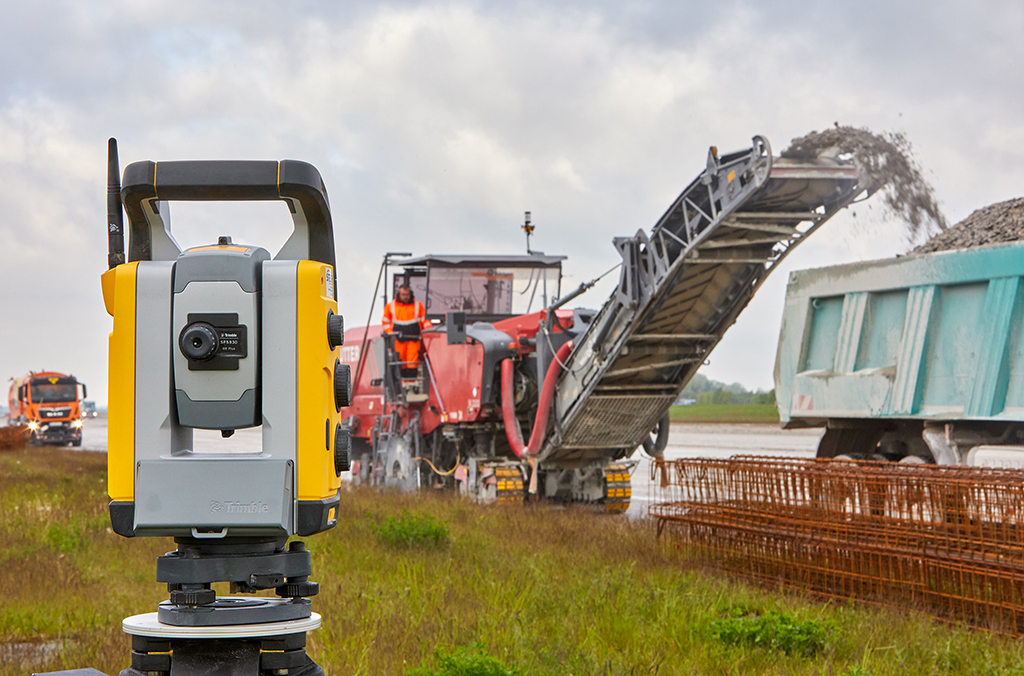 Business Challenge: Resurface over 300,000 square meters of concrete at the Leipzig/Halle airport in Germany.

As part of a modernization and infrastructure improvement effort at Germany’s Leipzig/Halle Airport (LEJ), Mitteldeutsche Flughafen AG was recently contracted to resurface the north take-off and landing strip, and a number of taxiways.

The northern runway has been in operation since March 2000 and the concrete surface has deteriorated. Since that time, about 400,000 planes, including some of the largest cargo and passenger planes in the world, have taken off or landed on the runway.

In total, the 3.8km long, 60m wide north runway and associated taxiways, approximately 300,000 square meters of concrete surfaces, needed to be replaced. In order to preserve the cement treated base course (CTB), the owner stipulated that the removal of the concrete surface needed to be vibration-free. In addition, the new concrete covering will be installed directly onto the milled surface so the elevation needed to be kept within 10mm.

Kutter GmbH & Co. KG Construction Company (Kutter) looked to its talented operators and 3D paving technology from Trimble to complete the project within these tight specifications. 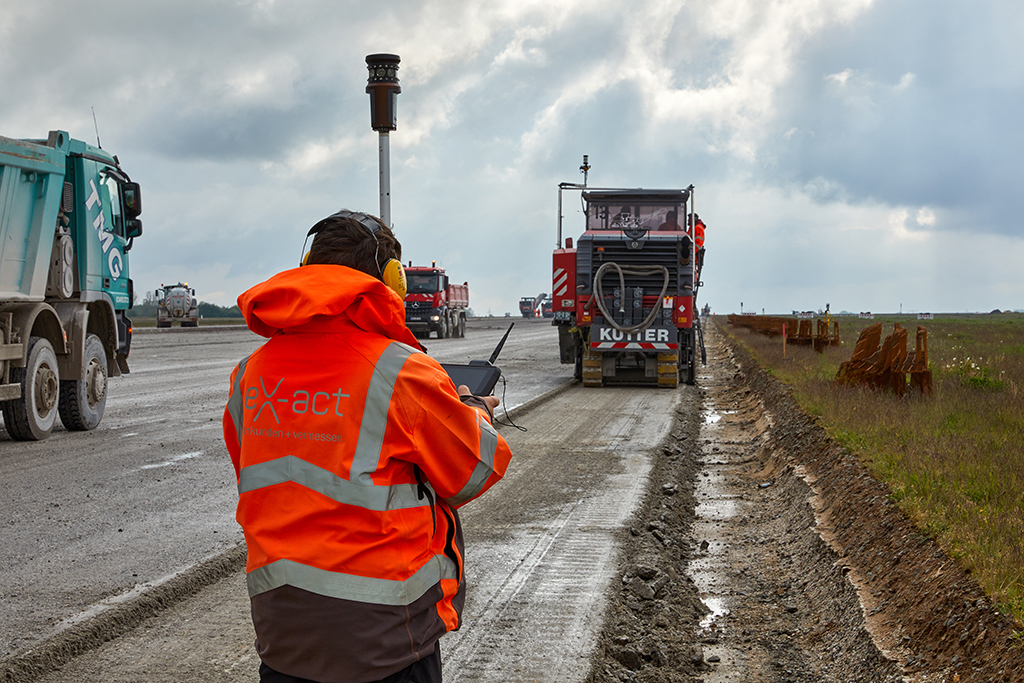 The owner specified that the runway surface be milled with enough precision that it could be used as the base to support a new concrete covering. As the milling contractor, Kutter used a Trimble PCS900 3D Paving Control System linked to the cold milling machines to create the new surface, achieving an elevation accuracy of +/- 3 mm over the entire area.

Prior to 3D milling, the owner provided a digital model of the surface with defined locations of the upper edge of the new final concrete covering. By deducting the layer thickness, a dataset for the position of the milled surface was produced. This data was then transferred to the cold milling machines. The machines then “know” the target height of the milled surface for every point.

Kutter accomplished the concrete milling in several passes. “To hand over a completely concrete-free planum, we removed 42cm everywhere,” recalled Matthias Dreer, site coordinator for the project, who coordinated deployment of the 15 large milling machines for Kutter working over several weeks in a two-shift operation.

The final milling pass was critical for the quality, because the milling machines needed to leave behind a suitably textured surface at the contractually-agreed elevation. This pass milled the bottom 4-6 cm of concrete and around 2 cm of the underlying CTB using a standard milling drum. Thanks to 3D-enabled milling, the CTB on the 80,000 square meters of taxiways and 228,000 square meters of runway presented a perfectly flat surface.

On the site, crews relied on the Trimble MT900 Machine Target with patented active tracking technology on the milling machines to guarantee a secure connection with a series of Trimble SPS930 Universal Total Stations placed strategically along the runway.

“Using the total stations, we were able to keep the milling process going smoothly, even if the site was very busy with traffic, numerous machines and trucks,” added Dreer.

A further advantage of this setup proved to be the stable communications between the total stations and the prism. With the Trimble system, each active prism device has an individual address. The total station is programmed to this precise address, which enables rapid re-location of the prism following a break in signal.

Accordingly, the milling machine can be permanently controlled with millimeter accuracy. For this, the Trimble prism uses LED lights that transmit on a particular frequency. A CCD camera in the total station recognizes these actively-transmitted light waves via a filter.

“This signal is clearly defined and recognized even under adverse conditions. Dust, rain, snow or fog do not impair communications. And it worked even when the sunlight was directly striking the prism,” explained Mattivi, outlining one of the key advantages.

Dreer confirmed, “Using active tracking, we were able to achieve excellent results at the airport, even under extreme wind conditions where a lot of dust was whipped up. Even under these boundary conditions, the system operated stably.” 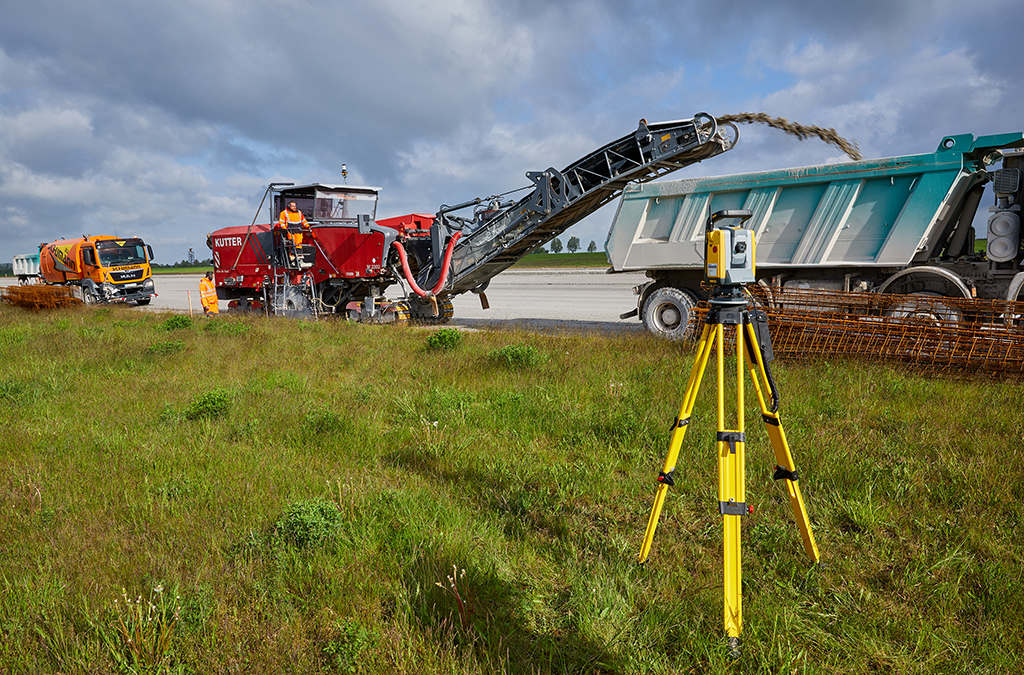 The Trimble-enabled solution is engineered for fast communication, meaning that the machine controllers reacted very quickly in the event of deviations. As a result, the milling machines are able to travel at speeds of up to 25 m/min—with the system still delivering very high accuracy. This boosts efficiency when milling large surface areas.

“Using the Trimble system, we are able to remove the runway covering so accurately that the concrete paver can subsequently install the new surface precisely in position on the milled surface. There is no longer any need for leveling layers. That saves our customers a lot of construction materials, and naturally costs, too,” explained Dreer. “With our large milling machines and the 2.20m milling width, we were able to realize over 7,000 m2 per machine per shift, on average.”

The team completed the milling project in seven weeks.

When it came to surveying technology, Kutter relied on a collaboration with proven system partners for the Leipzig/Halle Airport project.

“We are given the target data by the clients, and then we always work with a local SITECH provider on site,” said Dreer.

For the Leipzig/Halle Airport project, the survey team from ex-act GmbH from Zwickau worked with Kutter, in collaboration with SITECH, to handle total station calibration, installation of the components on site and elevation monitoring behind the milling machines.

SITECH consults with contractors and leases the right equipment for each project. Having the optimal solutions to support the project and the crew on site is possible because Trimble uses the same proven components for milling as for excavators, motor graders, dozers and other heavy equipment.

“Throughout that time, we received excellent support from SITECH, the Trimble sales partner, and the affiliated surveyors’ office, ex-act GmbH. The systems operated as expected—due in large part to the outstanding specialist support, the short response times and clear communication,” concluded Fischer.

As if that were not enough, the quality requirements were not just met, but exceeded. Thanks to thorough preparation, the on-site management overseeing milling operations, the high-performance Trimble system and excellent support from SITECH, Kutter was ultimately able to hand over a 300,000 m2 surface at an elevation that never deviated by more than 3 mm—well below the specifications put forth by the client.