Customer Profile: Founded in 1961, McConnell Dowell Constructors (Aust) Pty Ltd is a leading infrastructure contractor in Australia, New Zealand and Asia. With headquarters in Hawthorn, Victoria, Australia, the company is best known for its large-scale projects that include roads and bridges, pipelines and railroad assets.

Australian infrastructure contractor McConnell Dowell has built some of the most challenging roads, rails, dams, pipelines, marine assets and other infrastructure in Australia, New Zealand and Southern Asia. The company’s success is largely due to its structured approach to every build, combined with creativity and progressive thinking.

McConnell Dowell strives to continuously improve its processes, often with help from technology. That’s especially true on the company’s latest endeavor, the Level Crossing Removal Program (LXRP). This multi-year program was established by the Victorian Government to oversee one of the largest rail infrastructure projects in the state's history.

As part of the Western Program Alliance (WPA), which also includes Arup, Mott MacDonald and Metro Trains Melbourne, McConnell Dowell is charged with removing and renovating a set number of the crossings. To-date, the alliance has completed six of the crossing projects, and is currently working on another four.

Michael Mongan, Project Director with McConnell Dowell, says, “There are many day-to-day challenges on these sites, as they are typically very large, in some cases upwards of 6km long. And we’re working within an operational light rail environment, so trains are flying by at 100km an hour. In the early days, a lot of the communication was happening via photography or just verbally delivered.”

“Just surveying the individual project sites was a challenge,” adds John Dyer, Engineering Manager with WPA. “Even the best surveyor in the world might only survey on five- or 10-meter grids, so we would only get a snapshot of that particular point or area, which then had to be interpolated on a 2D drawing. We needed a way to survey the whole site quickly to provide a timely resource for optimal collaboration and project management.” 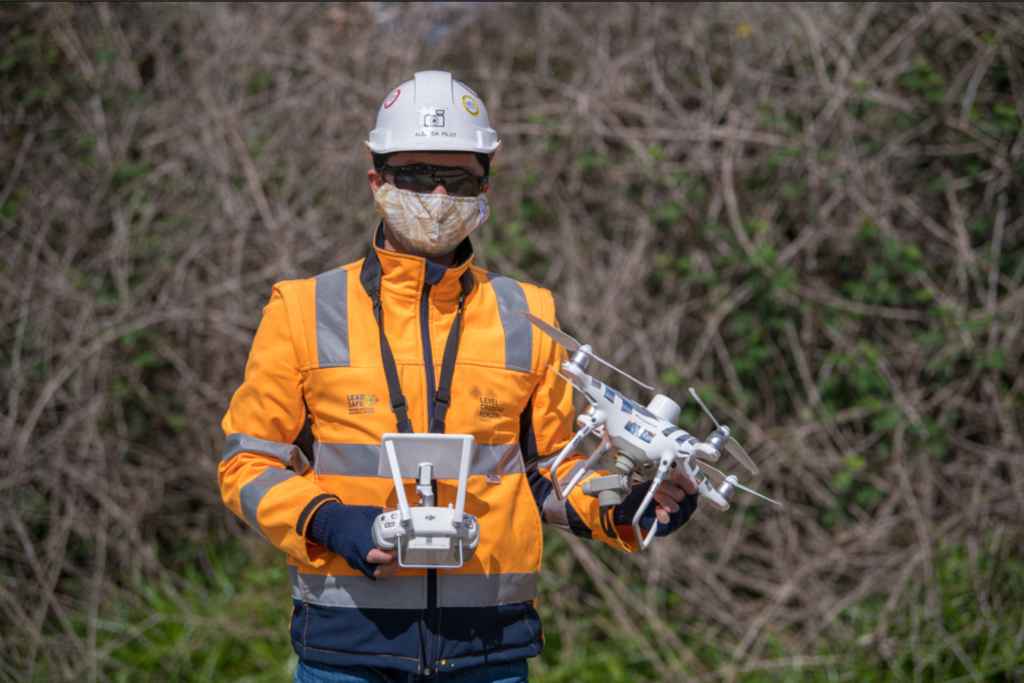 Flying High
The LXRP’s Wyndham Vale Stabling Yard project in Victoria, begun in 2018, was the proving ground for the value of aerial surveying by McConnell Dowell.

The project involved the construction of a stabling yard, driver facilities and a bypass track connected to the Geelong line, which would allow trains to access the facility without delaying passenger services. The 3km long site includes four tracks, each capable of stabling two, six-carriage V/Line diesel Velocity trains, a refueling facility and other structures for staff amenities, security and network equipment.

Construction of the track and facilities required a considerable amount of excavation. The drone-gathered data provided a safe and fast visual for collaboration. Alex Wong, Senior Digital Engineer at McConnell Dowell, confirmed, “We were able to fly the drone over the site, which took about 10 minutes, upload the data to Trimble Stratus and have it ready for review and analysis the next day.”

Since that first project, Wong has found that the mapping and analytics platform is perfectly suited for many project management needs. “We really like the visual nature of the tool and the ability to calculate volume quantities. Another strong point of the system is that it uses simple, straightforward interfaces,” he said.

Visibility of the project progress was one immediate advantage, according to Dyer. “We get pretty much the whole picture—literally. For us, it’s about turning data into useful information. To be able to use that digital information for a multitude of different needs, whether it be site supervision, checking excavation levels, or comparing productivity from week to week, is a tremendous advantage.”
Mongan added: “On previous projects, we depended on a supervisor to clearly articulate the message of the location of where a change or issue has arisen. Now, we can simply press a button and show it on a screen to everyone—that’s powerful.”

For the Stabling Yard, McConnell Dowell laid 3,500 meters of track and installed overhead gantries for the future planned electrification of the line. Construction took three months, with zero impact to train operations.

Digital Adjustment
The WPA, with McConnell Dowell handling the construction, is currently working on a handful of other level crossings throughout the region.

For Wong, the Trimble Stratus platform has become an essential tool from design through construction. In the pre-planning phases of a project, it’s a vital communication tool. “Quite often during the tender period, we have people with different ideas of how things work,” he said. “With the 3D aerial data, that discussion becomes much more focused and everyone is better prepared for the next phase.

Wong says another advantage of Stratus is logistics coordination.

“Material delivery planning can be a challenge on these sites. Recently, a subcontractor from Tasmania needed to deliver some very large steel piles for a bridge structure. Due to the pandemic, we were not able to get to the site,” he said. “Trimble Stratus enabled our subcontractors to plan the safe delivery of these very large elements in a laydown area. Further, we provided the piling contractor access to the topo data of the site in question, and that team is able to pre-plan activities from material laydown to equipment locations, with full awareness of site restrictions.”

It’s also become a valuable tool for comparing design with as-built conditions. “In my opinion, this platform creates a central information hub for everyone from the client to the subcontractor,” Wong concluded.

Dyer agreed and noted that he relies on the platform analytics to verify that specific tasks meet specifications. “I’m a great believer in onsite visits, but the aerial surveys fill in the gaps between my site visits, and it enables me to get, literally, a more strategic view of the whole project,” he said.

He points to the construction of a temporary railroad track around the side of the current worksite as an example of the value of Stratus. “On one of the projects, we needed to shift the trains to a temporary track so that we could build new bridges,” he said. “While reviewing the aerial survey data, I noticed that the sleeper (tie) spacing between the rails didn’t appear to be at the correct spacing for what the design specified. I used Stratus to measure the centers between the sleepers and found several discrepancies. This is something that we would not have seen because you’re talking about a 50-mil or 100-mil difference in spacing.”

A quick call to the construction manager onsite verified the issue, which was already on the task list for adjustment.

“The bottom line is, with Stratus, we’ve increased our level of quality, collaboration and transparency,” said Dyer.

Stratus has also been the go-to platform for McConnell Dowell to share with the LXRP technical advisors. Dyer explained, “These individuals are heavily involved early in the project, even before we break ground on a project. In the past, once construction begins on a project, they don’t see much more than progress reports. Now, we’ve given them access to Stratus, and they’re over the moon. For the first time, they can actually see the construction progress. Better yet, when we have an issue arise, we can show them the area of concern.”

Dyer believes the raised visibility opens the door for much quicker response to questions or issues, and therefore much faster resolution. “I’m a huge advocate of moving into the digital engineering world. I see this as a fundamental part of that whole picture, bringing intelligent use of data to create usable information,” he said.

The Stratus platform is also a key asset in weekly, and sometimes daily, safety discussions. The McConnell Dowell team believes having the entire crew see construction progress from one week to the next provides visual awareness of potentially new hazards on a jobsite.

Continuous Improvement
Today, Trimble Stratus is the go-to survey tool on every LXRP project and many other McConnell Dowell projects as well.

Mongan confirmed, “We perform aerial surveys with the drone on quite a few of our sites around Australia now. That’s incredibly valuable for me, as I can check the progress of any project in the region at any time.”

He’s also using it as a tool to drive process improvement. “If there’s a similarity between our projects, we can then pick up the phone and ring that project and find out what they’ve been doing, as well. So, it gives us visibility of what’s happening on other sites that we wouldn't normally have,” said Mongan.

Dyer noted that the biggest surprise of the drone-based survey platform has been the low cost of investment. “When we asked Alex how often he does flyovers on projects, he said a couple times a week,” he said. “At the time, my biggest concern was the cost, but it’s so affordable with a clear ROI. We simply can’t get this level of information with ground-based surveys. It’s helped make our jobsites, particularly the LXRP projects, safer, more efficient and definitely more collaborative.”