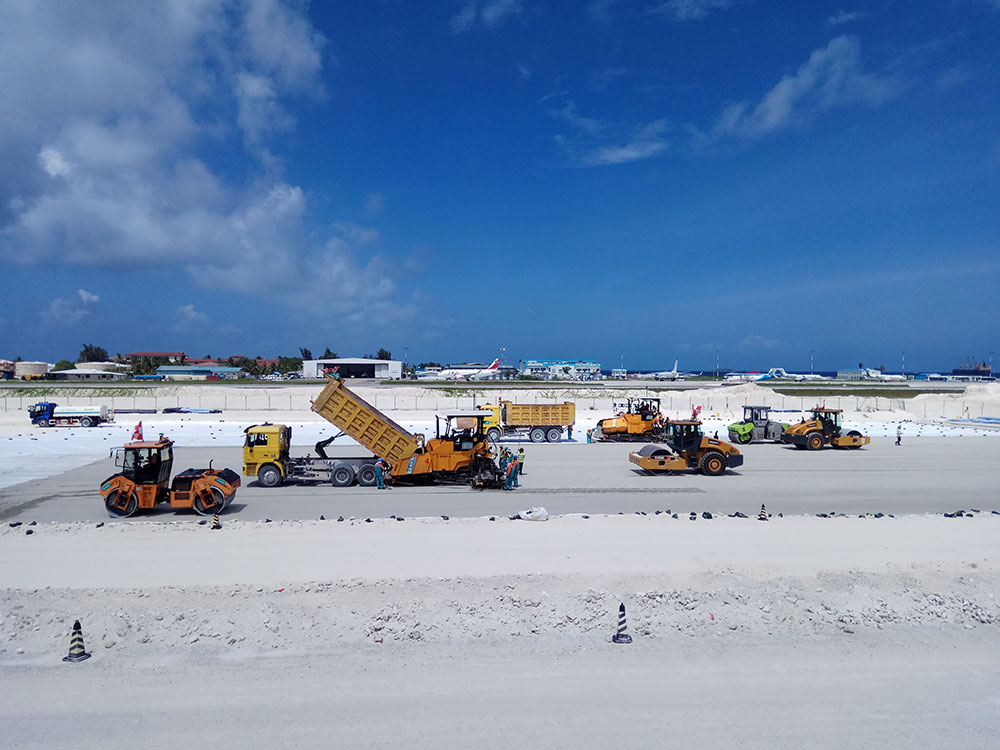 BUCG was hired as the general contractor for a massive $440 million (US dollars) expansion and land reclamation effort for the Maldives Airport. BUCG turned to Trimble for help improving safety and productivity of the personnel on the job, optimizing operations and completing the project on time and within budget.

As the largest and most well-respected Chinese-owned construction company, Beijing Urban Construction Group (BUCG) has had the distinct honor of constructing many of the nation’s namesake land development projects, including the National Stadium, the National Theater for the Performing Arts, the National Museum, the National Indoor Stadium, the Olympic Basketball Stadium, the Olympic Village, and Terminal 3 of Beijing Capital International Airport. For its innovative approaches and steadfast reputation for meeting project goals, in 2016 BUCG was awarded the contract for the expansion of the Ibrahim Nasir International Airport on Hulhule island in the Maldives, which is part of the Indian Ocean island group. Scheduled for completion in 2019, the expansion will include a new 3800 meter-long and 65-meter-wide runway, a fuel farm, a cargo complex and a new terminal. The new runway will also open the airport to the Airbus A380 jetliner, the world’s largest passenger airline. The fuel farm, or fueling area for the planes, will have a storage capacity of 11.8 million gallons and a cargo complex with the capacity to handle 120,000 tons. 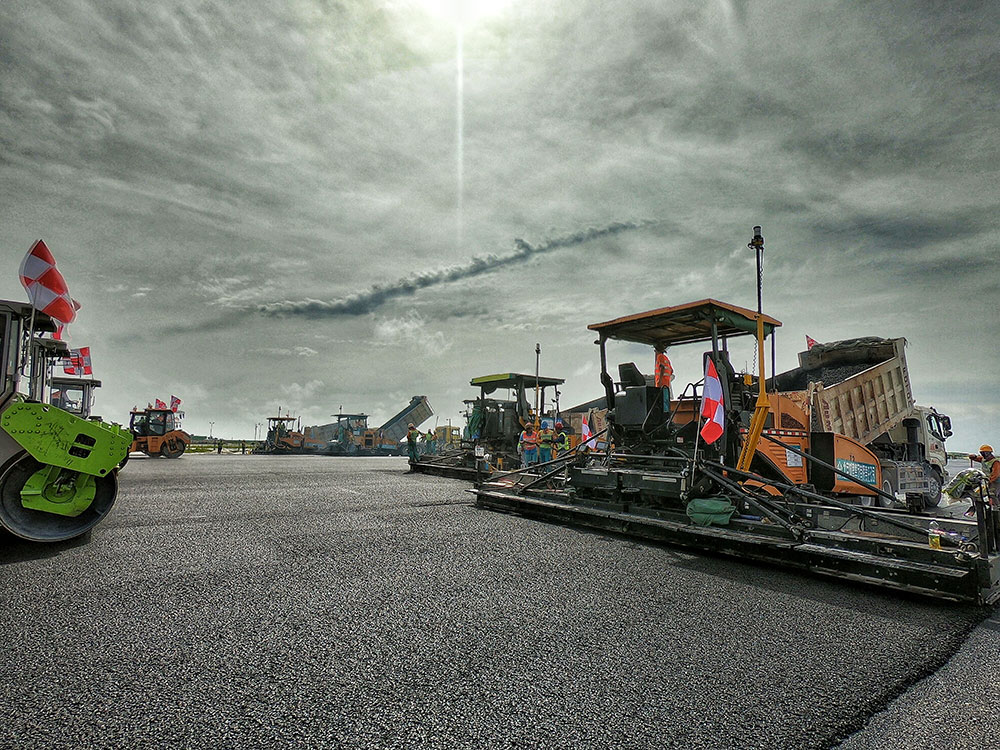 In addition to requiring mass excavation, fine grading and precise runway paving and compaction, the Maldives Airport expansion also requires extensive land reclamation work. To complete the runway, four million cubic meters of sand must be removed from the inner lagoon adjacent to airport, which was also dredged in 2012 during a previous expansion. Revetment work is also needed to absorb the energy of incoming water, using asphalt and sand bags with a geotextile filter. BUCG hired several subcontractors for the dredge work and to complete the gas and utility lines for the fuel farm, and a Building Information Modeling (BIM) consultant was hired to create a BIM implementation plan.

Facing tight parameters on this project and looking to streamline data flow and communication across the build, team leaders at BUCG reached out to Trimble and MAG Science & Technology Co, Ltd for help. After completing a site consultation and a detailed recommendations report, BUCG implemented several Trimble office software and field solutions. Trimble technology partners from Germany, Australia and Shanghai also supported the implementation and training efforts with MAG supported onsite installations and services. 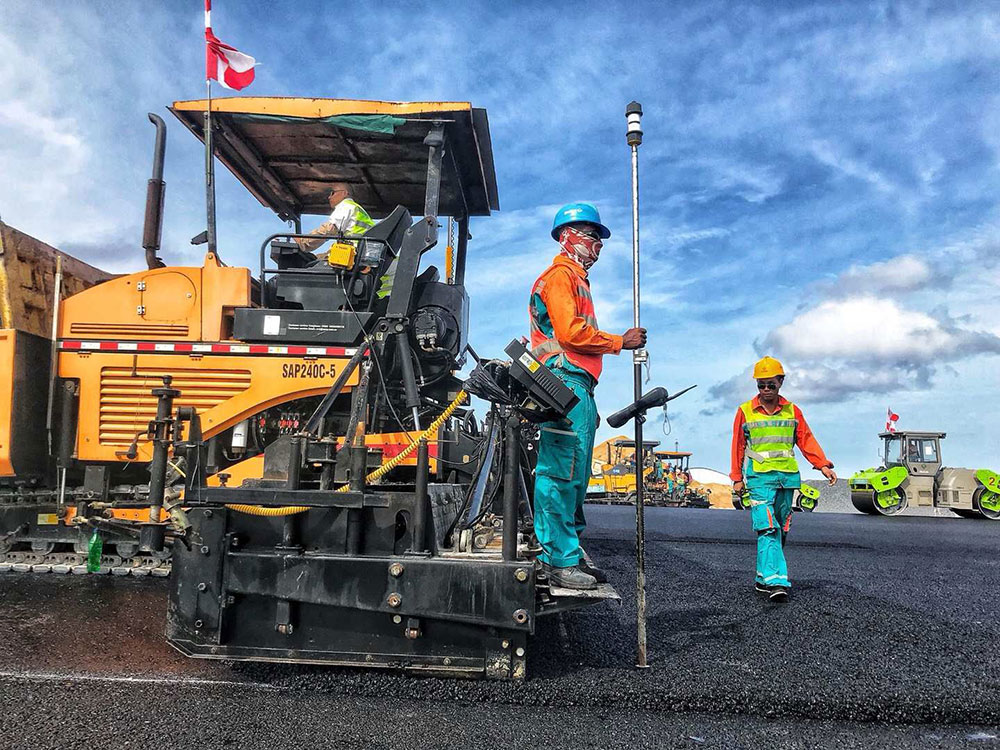 Improved collaboration, information sharing and scheduling across the project.

General manager from MAG Building Division, Mr.Guan Shuan explains that they started by implementing Trimble Connect to enable a much more integrated data workflow across the jobsite. Trimble Connect is a cloud-based platform that powers information and data exchange between owners, architects, subcontractors, engineers and trades that traditionally leverage different software and hardware tools. With built-in connections from Trimble Connect to these other industry-leading project tools, users have unified cloud-based access to all drawings, project documentation and 3D constructible models for the project, through the Trimble Connect mobile app or web-based service.

“On a project of this size, it’s common for people to use different methods, like email, social media and mobile apps, like WeChat, for communication and information sharing,” said Mr. Guan “We wanted a centralized database for capturing all of this project information, and that is what Trimble Connect delivers. You can have all of your drawings and 3D models in the same location, and everyone has access to the same data. Data is connected from the office to the site, so there’s a level of clear transparency on the jobsite, on the quality and on the schedule.” 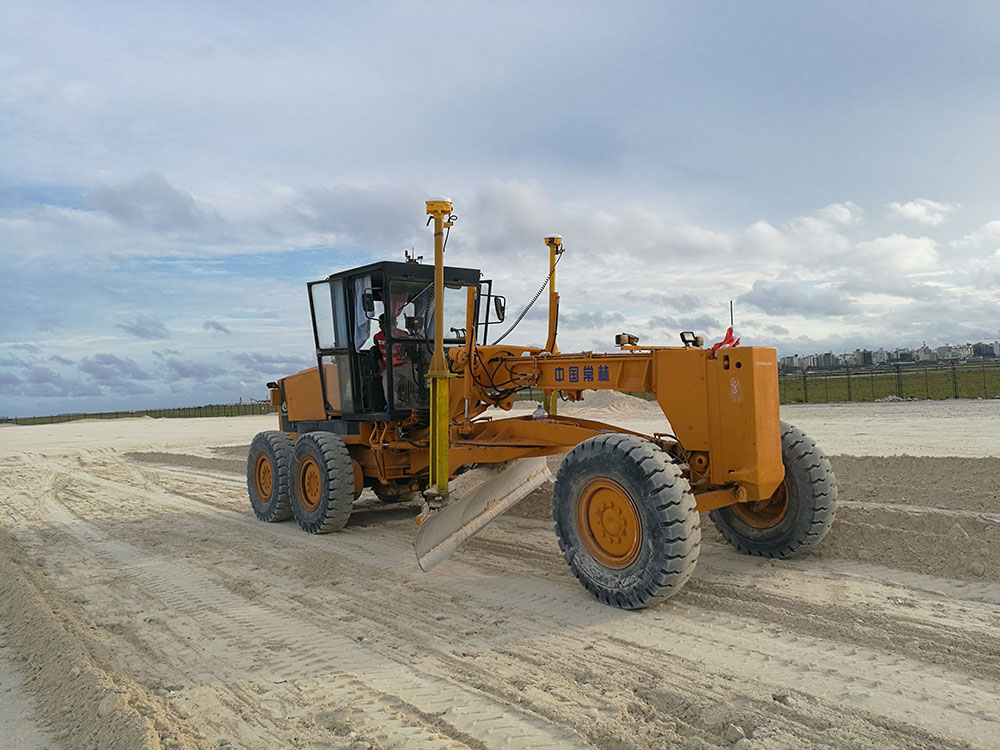 The team is using Vico Office to generate 4D schedules and estimates directly from 3D models, which are also uploaded to the cloud through Trimble Connect. The BUCG team likes that model elements in Vico Office can easily be turned into schedule tasks by location using the schedule planner application, and that those tasks are dependency-linked and optimized to create a Flowline plan. They believe model-based estimating and the ability to plan and create detailed and accurate estimates and schedules have been critical in keeping this project on track.

The team hit a key project milestone in August 2017 when it completed the asphalt paving on the original Maldives Airport runway. Asphalt paving took three months from start to finish, with four pavers, each running the Trimble PCS900 Paving Control System and leveraging the Trimble SPS930 Universal Total Station for positioning. The elevation models were created digitally in Business Center and referenced by the PCS900 system during both milling and paving. The paving control system uses 3D automatic screed control capabilities to significantly improve paving productivity and the smoothness of the airport surface. BUCG Project Manager Mr. Joy Zhang explains that with the 3D paving control system, one surveyor on the ground was able to manage three pavers, as opposed to conventional methods where two or three surveyors were needed for each paver. This has optimized the BUCG crew and increased productivity, allowing the team to reallocate crew members to other tasks.

Twelve rollers followed the four pavers, with six utilizing the Trimble CCS900 Compaction Control System. Each compactor also included a wireless modem connecting to a fleet management system called VisionLink from Trimble. Information such as pass counts, temperatures and compaction meter values were captured, as well as data about material layers. This real-time information was accessible by crew leaders on site, via a mobile app, and in the office. The real-time data was used to make recommendations and adjustments to the compaction process. 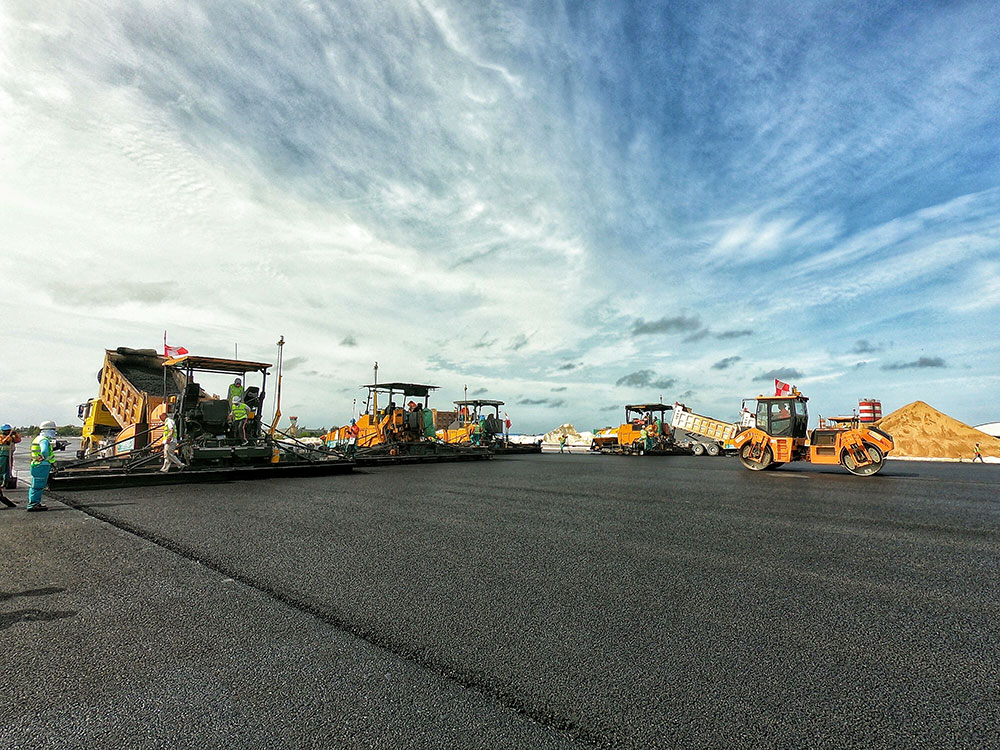 With this information, the BUCG team was able to reduce over compaction, optimize fuel use and machine runtime, and ensure consistent compaction pass counts and meter values. This was particularly important because of the composition of the reclaimed ground in Maldives, which can have ‘soft spots’ that require additional compaction of surfaces at a rate of 24 to 36 times. Using VisionLink, subcontractors had the documentation to demonstrate they were hitting tolerances and that their compaction rates were in parallel with the design. This eliminated the possibility of any severe miscommunication onsite. The result was an overall increase in the surface quality and operational life of the runway.

Mr. Zhang from BUCG explains that the new runway is being constructed about 200 meters from the original runway, which added significant scheduling restraints and put an increased emphasis on safety and paving efficiency.

“The only window where paving work could be completed was between 1AM and 5AM, when flights were not running,” said BUCG “Because the prep work is done when you build the model, when the time window opens up we can just pave and then get to compaction. The PCS900 allowed all four pavers to work in synchronization without running any string lines. This was critical to maintaining safety on site and was a significant contributor to our team’s paving success, saving time, effort and material.” 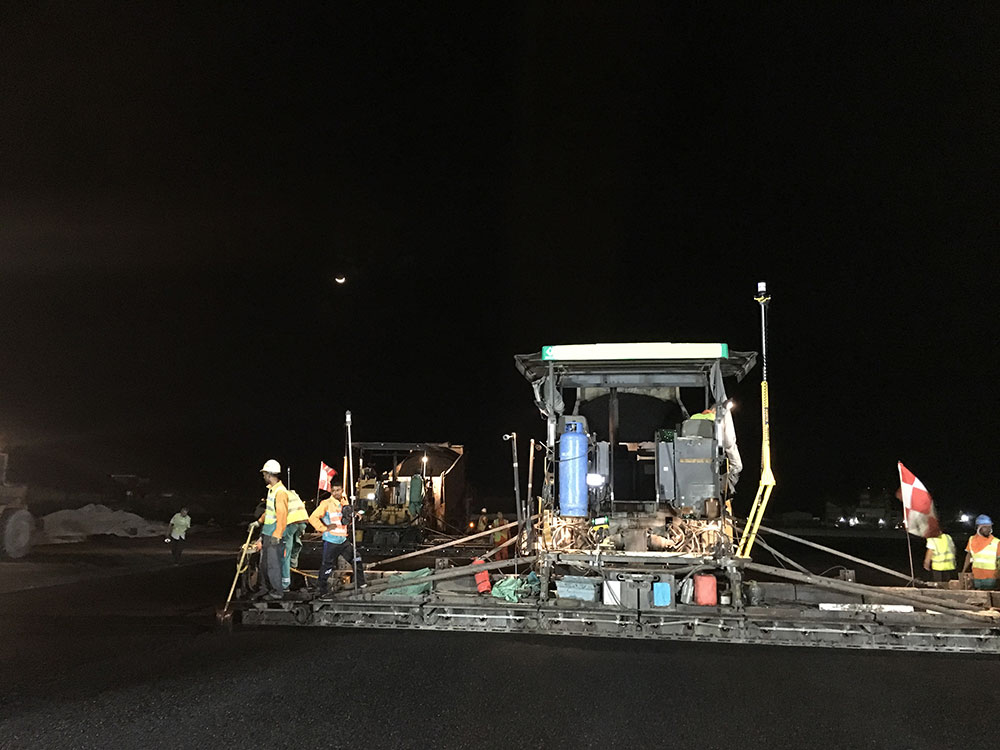 Improving jobsite safety and operations− at every experience level

For bulk earthworks and then fine grading work, the team also used the Trimble GCS900 Grade Control System on one dozer, one excavator and one motor grader. The machine control technology improved efficiency onsite by putting the design surfaces, grades and alignments inside the cab. The system uses construction total station technology to accurately position the blade or bucket in real time, significantly reducing material overages and improving productivity.

For grading work, the team was able to train a compactor operator to use the GCS900 system on a motor grader very effectively, in a short amount of time. This was important because the team’s most experienced operator was set to retire in three months and it would have been costly to keep him on board. The GCS900 system was also used on the excavator extensively to lay communication lines, oil pipelines and other critical utilities.

“Without the GCS900 system we would have had to put people in the water to take measurements and monitor where we were digging,” said Mr. Fenglin Zhang from BUCG. “Instead we were able to keep everyone safely away from the excavation because operators could watch the screen and excavate efficiently and directly in accordance with the design.”

Currently the Maldives Airport expansion and paving project is running on time and on schedule and is on track to be complete in 2019.