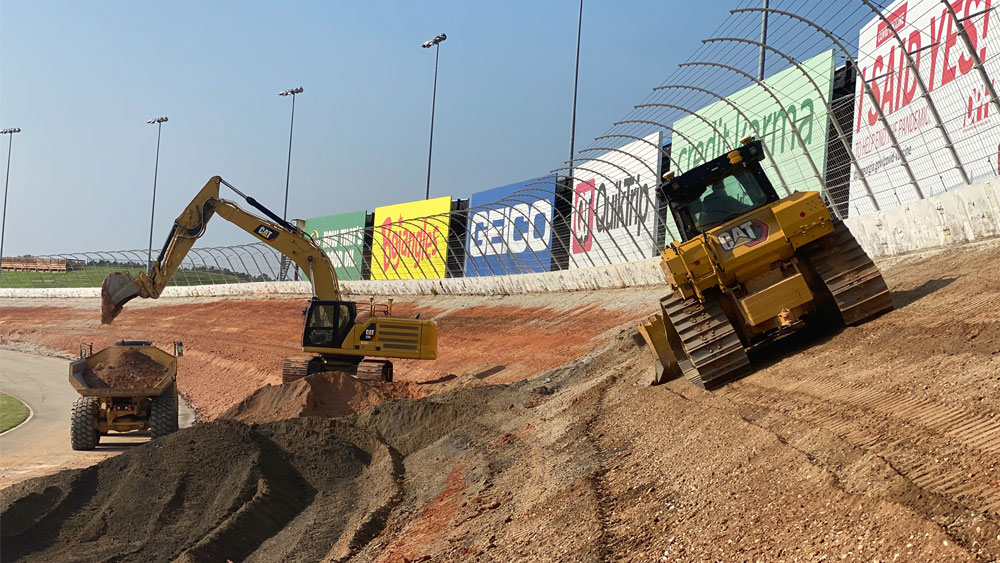 For NASCAR fans, the start of the 2022 season brought more than just the excitement and anticipation of a new Cup Series, it also meant the unveiling of the new Next Gen car—NASCAR’s first major technology and design change since 2013. For Bristol, Tennessee-based Baker’s Construction Services, it also proved to be an ideal opportunity to demonstrate its construction and technology skills on the multi-million-dollar repave and reprofile of the 1.54-mile Atlanta Motor Speedway.

To better accommodate the new Next Gen cars, the quad-oval track in Hampton, Georgia, needed to be altered considerably, which included modifying the banking on the turns from 24 degrees to 28 degrees and narrowing much of the rest of the track from 55 feet to 40 feet. The surface of the track also includes multiple layers of asphalt with self-draining features.

The project was completed in just six months, thanks to a talented construction team, creative earthwork and paving workflows, an advanced grade control platform and flexible software. 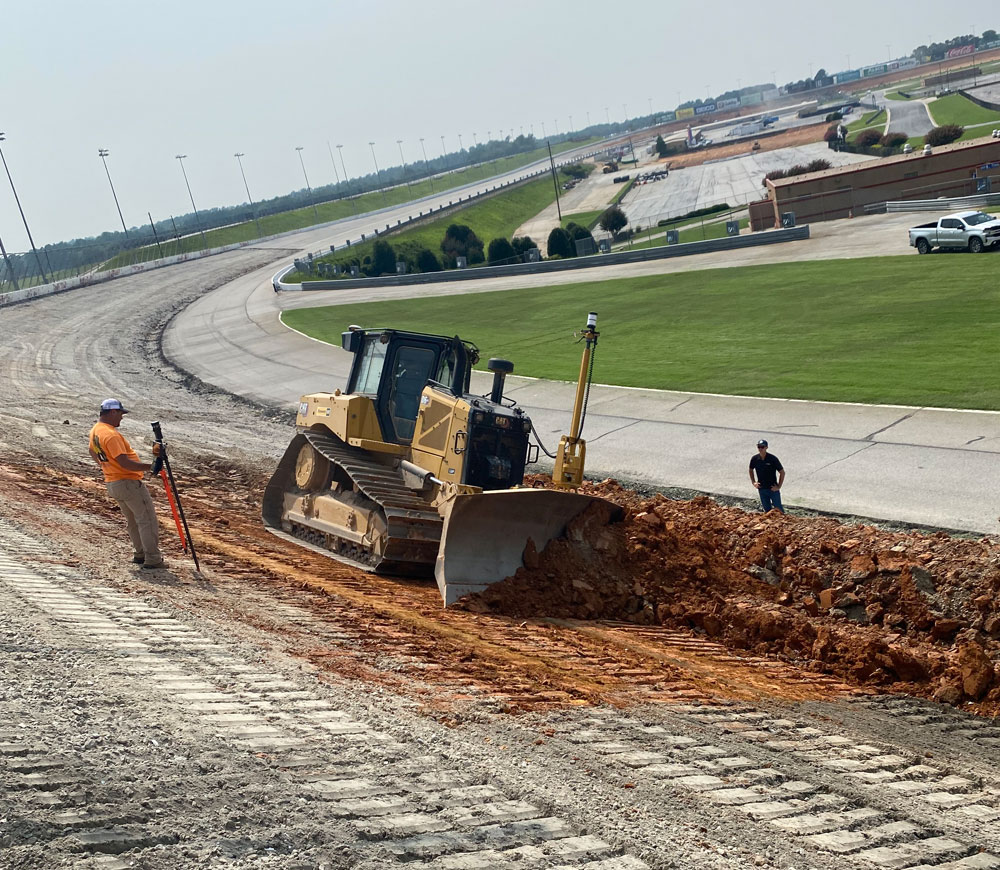 Bristol Beginnings
The skills to rebuild the Atlanta Motor Speedway in a short time frame required all of the lessons learned and progressive thinking honed by Baker’s Construction Services over the past 20-plus years.

That education began in 1996. When Bruton Smith owner/CEO of Speedway Motorsports, Inc. bought the Bristol Motor Speedway NASCAR short track in Bristol, Tennessee, he sought to significantly expand the venue seating (from 71,000 to 118,000) and parking areas in just a year.

Jerran Owens, current survey and machine control manager for Baker’s Construction Services, was the layout surveyor on the dragstrip project. “We did that with strings,” he recalled. “By 2006, we were contracted to regrade the oval track—that’s when we entered the machine control space.”

At the time, Baker’s Construction Services purchased the Trimble GCS900 Grade Control System for its Cat D6N dozer and a motor grader. The firm quickly became a leading grading contractor in the region.

“The speedway project was very successful and set us on a course for considerably more racetrack work over the next decade,” recalled Owens. “It also sparked a commitment to machine control, and particularly 3D.”

Since those early days, Baker’s Construction Services’ technology toolbox has grown significantly to including nine base stations and rovers, 20 machine control systems that include the Trimble GCS900 system as well as the newer Trimble Earthworks Grade Control Platform and Trimble SPS930 Universal Total Stations (UTS).

“We run all 3D now, whether we’re working on a racetrack or a roadway,” Owens added. “Over the years, we learned how to use these tools to optimize our skills on flat areas, and then translated those lessons learned to extreme conditions like high sloped racetracks.”

That expertise would prove especially beneficial on the Atlanta Motor Speedway. 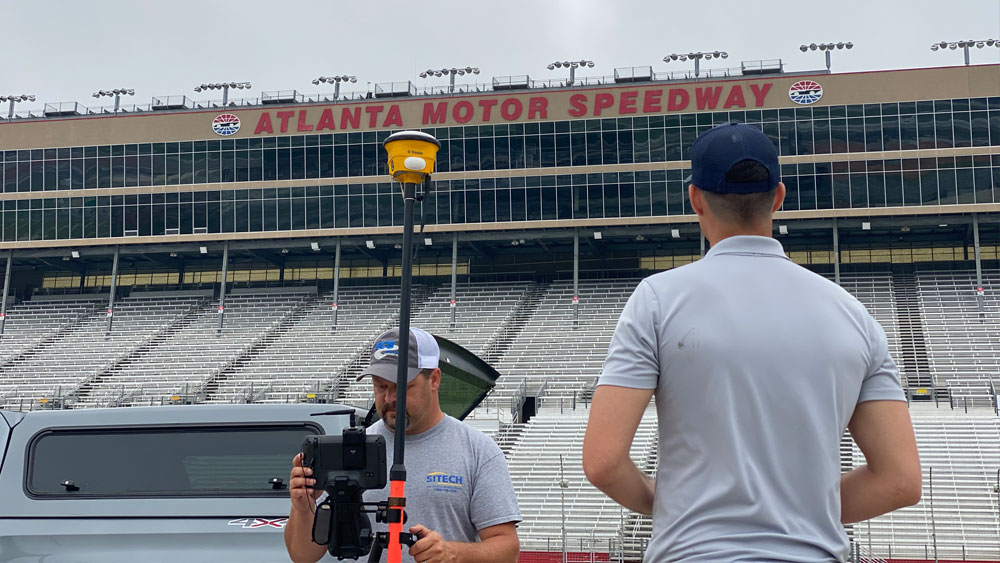 Atlanta Advantage
In 2021, Baker’s Construction Services was contracted to demo the old asphalt track of the Atlanta Motor Speedway and rebuild the subgrade while increasing the banked profiles by four degrees.

“The challenge was achieving an as-designed subgrade to tolerance on those steep slopes,” said Owens.

To begin the effort, the engineer provided a finished grade model. Owens exported that file as a Trimble Terrain Model (TTM) and sent it to an excavator and a dozer equipped with Trimble Earthworks using UTS on the jobsite. UTS proved a better solution than GNSS on the tight turns of the track. Owens continued, “The goal was to achieve a plus or minus .10-foot surface irregularity tolerance on the dirt, and further, the owner didn’t want to see anything above .05-feet on the plus side.”

According to the Baker’s Construction Services team, the Trimble Earthworks ‘Autos’ was particularly beneficial to meeting those specifications. Highly experienced operator Jessie Buchanan, for instance, relied on the Trimble Earthworks’ Autos functionality on a Cat 336 Next Generation Hydraulic Excavator to dig the subgrade and place the underdrain all around the track. 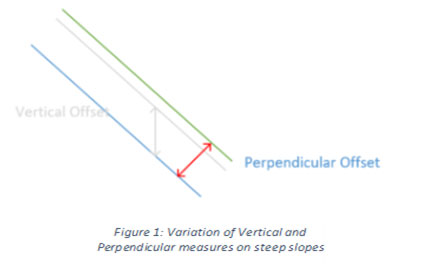 In addition, the built-in functionality and features of the software helped keep operators within specification. For example, operators used the software to configure offsets independent of GNSS or UTS to assure true offset distances.

“As we built the steep slope of the banks, we needed to use a perpendicular offset versus a vertical offset to maintain surface smoothness,” said Owens. “On a 28-degree bank the difference between vertical and perpendicular measures could be as much as .12-feet, well outside of the contract requirements. Fortunately, Trimble Earthworks lets us select that option.” 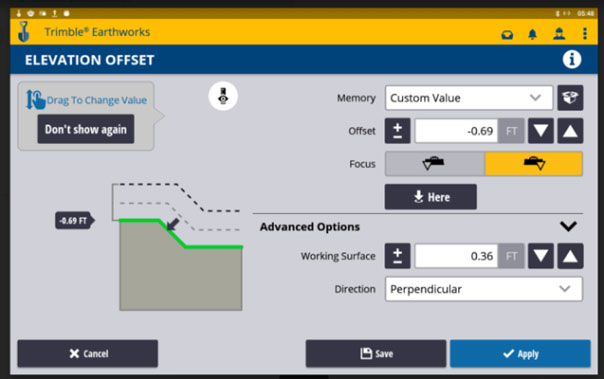 Figure 2: Trimble Earthworks provides the operator the option of choosing Perpendicular or Vertical offset directions to achieve the most accurate grade.

With the ability to select Perpendicular or Vertical direction for the offset (see Figure 2), Baker’s Construction Services’ operators were able to achieve the most accurate subgrade surface.

Baker’s Construction Services attributes its equipment and technology provider SITECH Mid-South for helping the firm’s operator fully understand and utilize the capabilities of the software.

Blake Pressly, a technology consultant with SITECH Mid-South, said, “We have a lot of steep slopes in Tennessee, so we train all of our customers who specialize in infrastructure and mining about how to run perpendicular offsets. For any extreme banking condition, our customers have to make sure everything is calibrated, shimmed and tightened up to eliminate all human error possible to meet limits.”

“That was one of the biggest things that made this project possible in the tight timeline,” said Scotty Burke, project superintendent and dozer operator for Bakers Construction Services. “If not for the Perpendicular capabilities, I believe the dirt work would have taken us much longer because we would have had to keep checking and rechecking to meet the defined specifications.”

Baker’s Construction Services’ skills with using technology-enabled equipment in complex situations would come in handy when the paving company needed some help on that same banked area. 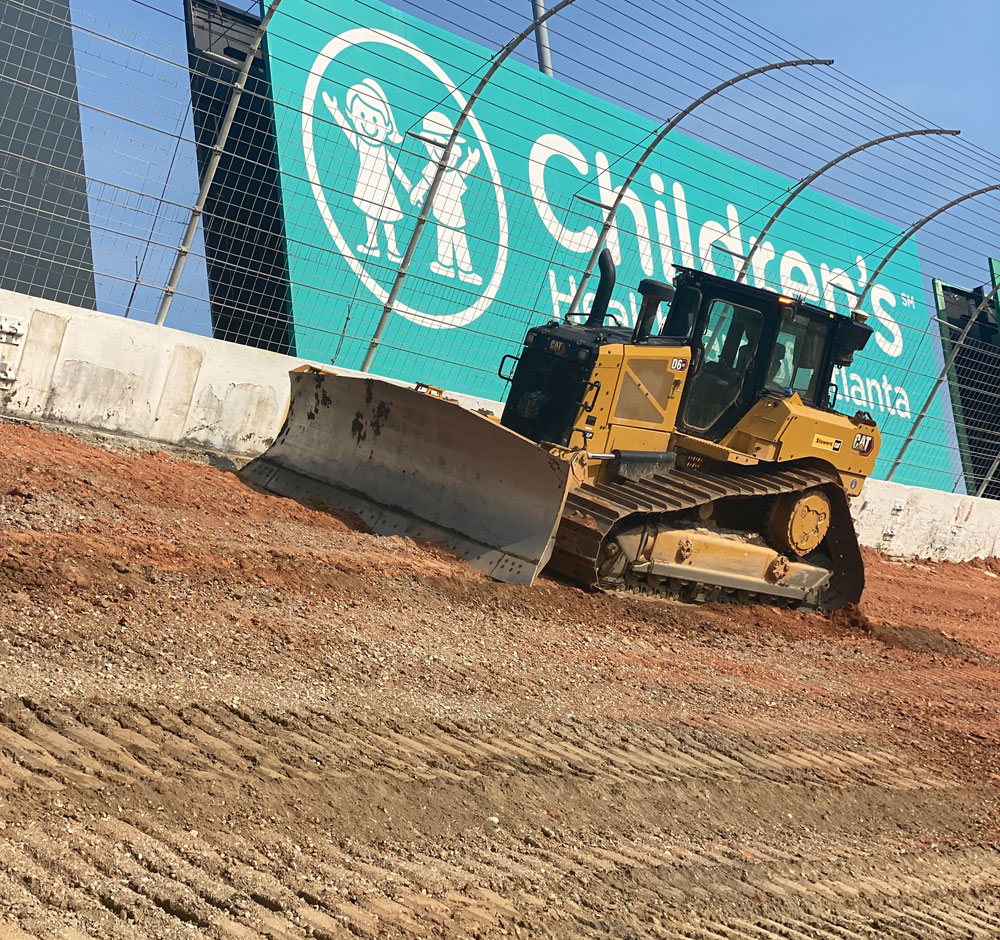 Slope Adjustments
Paving a steep slope, such as the 28 degrees on the Atlanta Motor Speedway track, is not unusual for companies that specialize in racetracks—but this particular track provided some complexities that pushed the paving contractor to the limits.

Sunmount Paving Company was contracted to pave the track once the subgrade was completed by Baker’s Construction Services. The common workflow for paving banks such as the new track is to use a strong arm crane over the top of the track to hold the paving equipment on the steep banks. That wasn’t possible at Atlanta Motor Speedway because of the existing infrastructure along the banked walls.

Sunmount tried to do it from the flat part of the track, but the subgrade is a silty, sandy soil, therefore the paver was prone to slipping, thus losing accuracy and surface quality.
Quick thinking and some collaboration kept the project moving forward. John Rauer, division manager for Sunmount Paving Company and superintendent on the Atlanta Motor Speedway project asked Burke, who was still on site doing cleanup, for ideas.

“He wondered if we could place base stone on the banks with a dozer instead of a paver, which would be easier to hold up on the bank,” said Burke.

The crews re-surveyed the area and then used the Cat D6K dozer equipped with UTS. Burke concluded, “It took a little longer to get the job done, but our combined crews and equipment were able to achieve the accuracy that the owner specified.”

The Atlanta Motor Speedway project finished six months after the demo began, and it was ready for the first race on the track in March 2022.