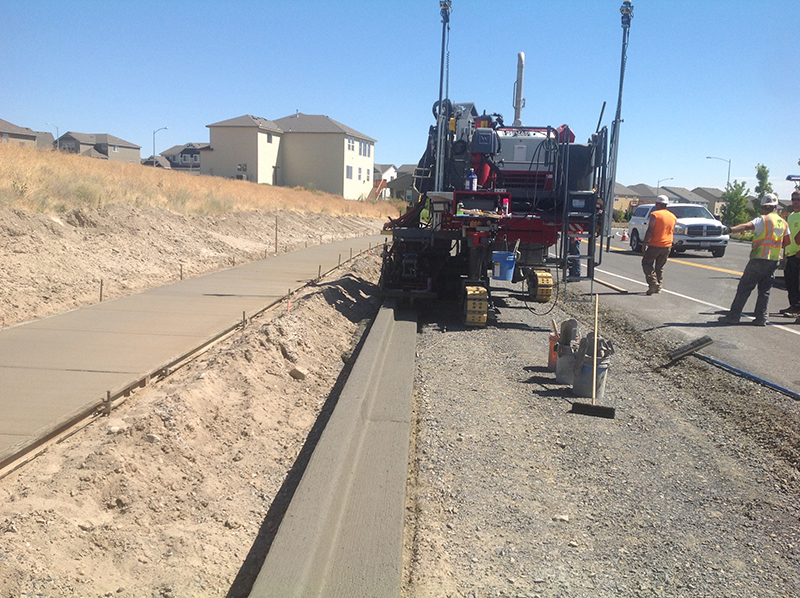 Customer Profile: Wm. Winkler is a premier concrete contractor that also specializes in civil and transportation construction. The company is based in the Inland Northwest, near Spokane, Washington and has nearly 150 employees at peak season. The company provides a variety of construction and concrete services focused recycling, crushing, site concrete, pervious and concrete pavements, performance slabs and flatwork, structural concrete and tilt up and other special applications.

Wm. Winkler is a construction and concrete company that is about to celebrate a very big milestone – its 100-year anniversary. The company was started in 1919 by William Winkler with the mission of delivering value to customers and supporting mutually beneficial relationships. Through three generations, the Winkler family has stood for honesty, integrity, and a job well done. Today, the company is run by Brian Winkler, and together with his team he strives to continue the tradition and to honor the legacy of his family and the company founders.

Wm. Winkler continues to look for ways to improve productivity and drive efficiencies by leveraging innovation and good old-fashioned ingenuity. In fact, the company recently completed a project for the Port of Walla Walla-Burbank Industrial Site using a next-generation concrete product known as Compacted Concrete Pavement (CCP). CCP uses additional additives and finishing processes to enhance the durability of the pavement. The material promises a shelf life of 40-plus years with minimal maintenance and the ability to withstand freeze thaw cycles.

In 2010, Brian Winkler recalls that he and his team truly committed to site positioning equipment and machine control technology. Since that time, Wm. Winkler has added several machine control systems to its fleet of nearly 300 pieces of heavy equipment, which includes equipment from its rolling and dirt groups.

“We have so much canopy cover in the Northwest that reliability on satellites can be questionable, so it was really an easy decision to go with the Trimble SPS930 Universal Total Station,” said Winkler. “When you have a live commodity like wet concrete, it’s really not worth the risk of losing it or setting it in the wrong place.” 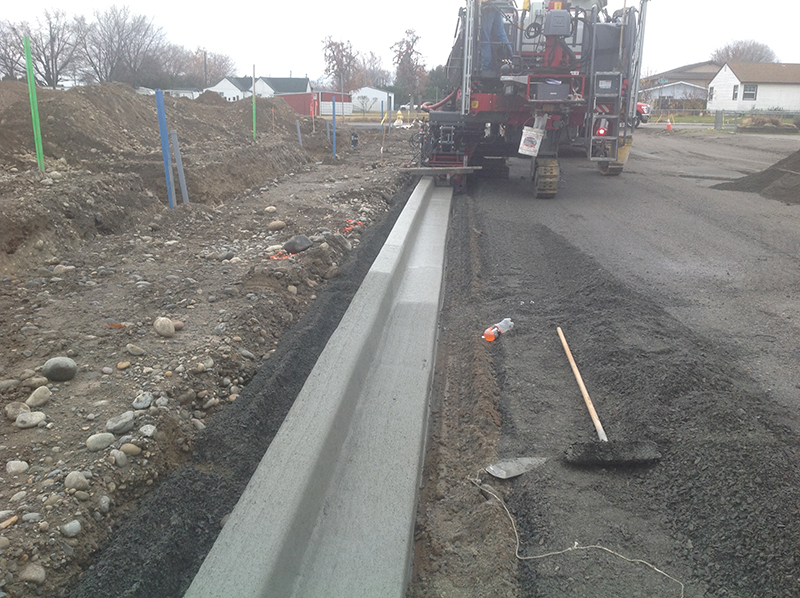 Since 2010, Wm. Winkler has integrated Trimble equipment into almost every aspect of the business, from survey and layout to concrete paving and earthwork. That includes the Trimble GCS900 Grade Control System on dozers and graders, as well as the Trimble PCS900 Paving Control System on a slip-form Wirtgen curb and gutter machine. It also includes Business Center – HCE for 3D modeling and Trimble site positioning for performing measurements, stakeouts and as-builts. For instance, Wm Winkler is hired for a lot of subdivision work for various developers. After performing an initial topographic survey of the subdivision and using the site plan from the engineer, the team develops a 3D model with Business Center – HCE, which includes the sewer, water, storm drainage, utility crossings, fire hydrants, curb, sidewalk, curb gutters and other assets.

Then, without waiting on a professional surveyor, site engineers, foremen and other crew members use Trimble SCS900 Site Controller Software on the Trimble Tablet to perform accurate positioning, and to stake, measure and record information across the site. Winkler explains this might also include staking footings, pilasters and bolt patterns working from the 3D design model. 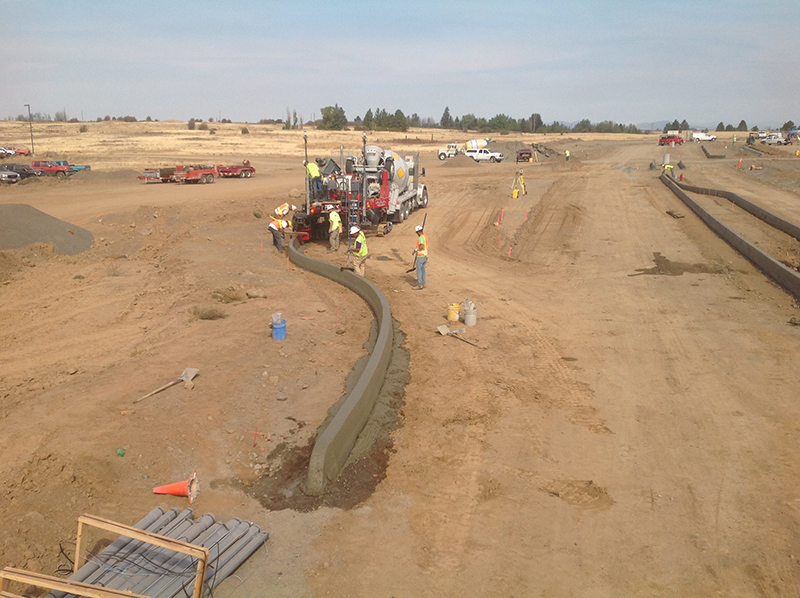 Cutting time on the project by about 25%

“We’ve integrated Trimble equipment across almost our entire business,” said Winkler. “When we go out to a site now there’s very little, if any, wood in the ground, because we just do everything off the model – sewer, water, curb and walk, right up to paving. For every month of work, we are able trim approximately five days off the schedule using GPS and machine control. What used to take us 20 days can now be done in 15, which we love and the customer loves.”

Towards the end of the project, the team may use the positioning system for summarizing the quantities across the project, whether that’s cubic yards of dirt, linear feet of sewer, square yards of pavement, or weight of recycled material collected. 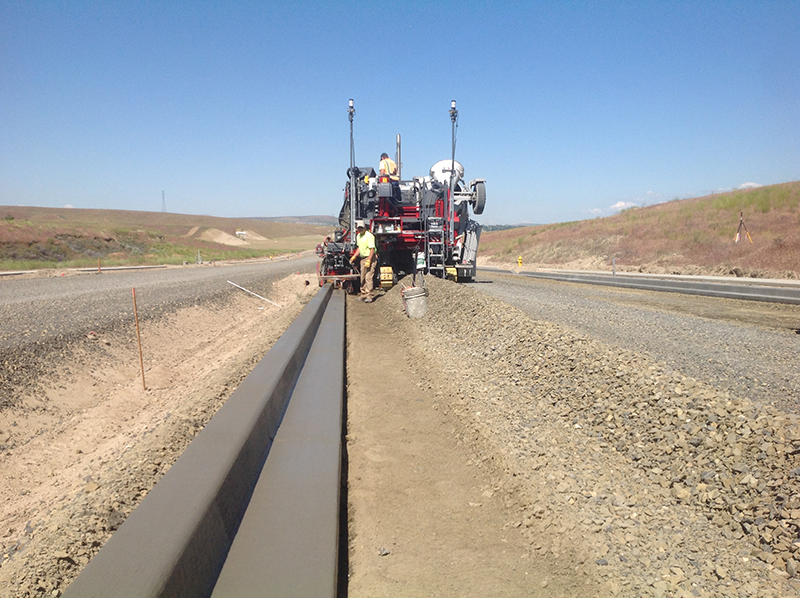 “We also run a full recycle facility where we recycle construction materials because we are a big proponent of the environment and, well, because it’s just doing the right thing,” said Winkler. “We use the SPS930 Universal Total Station for measuring stockpiles and quantities as well because it it’s all accurate, quantified and neat and tight. Because of Trimble technology we haven't had to spend much time in the field doing traditional survey or putting stakes in the ground, which is a big time and money saver.”

Working at night with zero string

On a recent project for the Washington State Department of Transportation (WSDOT), Wm. Winkler put its Wirtgen curb and gutter machine to the test. The company was hired to complete about eight miles of curb and gutter work on Bob Olsen Way in Kennewick, WA. Winkler explains that using the curb and gutter machine with the Trimble PCS900 Paving Control System and a Trimble SPS930 Universal Total Station helped his team to cut about two weeks off the two-month project. The team accomplished this setting zero forms and zero string lines,

“Utilizing PCS900, the SPS930 Universal Total Station and our slip forming machine means that we are able to save a lot of labor and deliver a product much earlier and much cleaner because we don’t have to set any string,” said Winkler. “In the past, the day before we poured, the surveyor had to go and set the base control and run a level loop. Now, they are pouring within a couple hours of being there, cutting out at least a day of survey and set-up up front.” 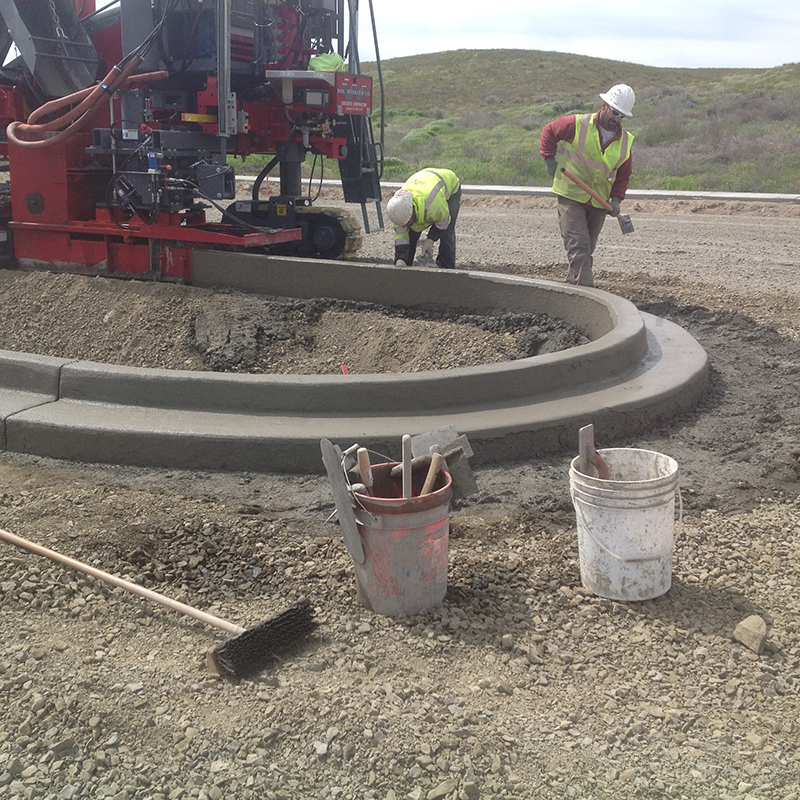 On another WSDOT project, Wm. Winkler was hired for curb and gutter work for a two-and-a-half mile stretch on US Highway 2 in eastern Washington. The work included setting up a traffic island on top of the asphalt roadway, in addition to putting in top-mounted curb. Part of the challenge of the project is that most of the work had to be completed at night, outside of heavy traffic hours. This meant the work window was extremely tight. Winkler explains that without the Trimble PCS900 system providing guidance for its slip-form machine, the team would have had to set string. Instead, the team could basically show up and start pouring concrete immediately. When asked about the secret to having a company that’s been around for 100 years that continues to innovate, Winkler is humble in his response.

“I would say we have to applaud our people for embracing the new technologies and not getting stuck in their ways just because they’ve worked fine in the past,” said Winkler. “We’re always striving to do more, learn more and deliver more value to our customers. These new technologies help us refine our skills and that really make us more productive.” 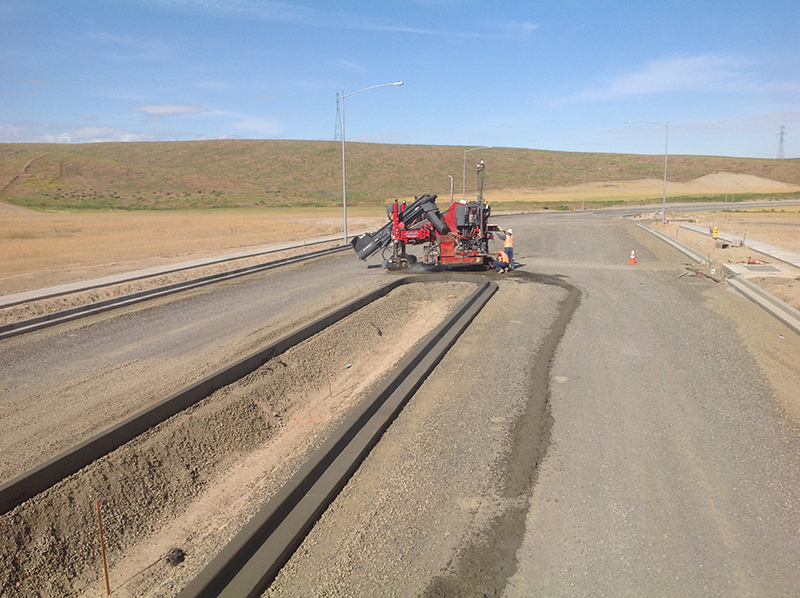